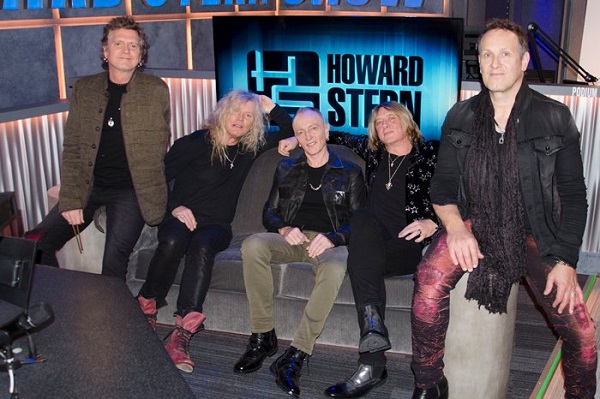 Don’t miss Def Leppard on Howard Stern tomorrow, March 26th on SiriusXM. Catch the west coast feed at 6 am PT on Howard 101 at this location.

If you missed it, watch the clips below.

THE ‘DIFFICULT BIRTH’ OF ‘PYROMANIA’ AND RICK’S PHANTOM LIMB

Def Leppard’s hit-filled 1987 masterpiece “Hysteria” sold over 20 million copies worldwide and remains one of the most successful albums in rock and roll history, but the recording process included more than its fair share of challenges.

“It was a difficult birth,” Joe recalled.

Things got off to a rocky start when Robert “Mutt” Lange, the super-producer who worked with Def Leppard on their 1983 album “Pyromania,” told the band he couldn’t work with them on “Hysteria” because he was “burnt out,” according to Elliott. The situation got infinitely worse after drummer Rick Allen was involved in a catastrophic 1984 car accident which resulted in him losing his left arm.

Howard wondered if Rick thought that tragedy might spell the end of his drumming career. “Yeah, I did,” Rick said. “It was horrible. I just wanted to disappear, but then really I found the power of the human spirit—and the guys, and my family, and everybody—was just behind me. It was really special.”

If there was one silver lining, it was that the accident may have been one of the catalysts for Lange rejoining the team. “And then when Mutt came to visit me in the hospital, I said to him, ‘Come and help us,’” Rick continued. “I don’t know if that had any influence on it, but he ended up coming back on board.”

Doctors predicted Rick would spend six months recovering in the hospital, but he was ready to make his comeback within just one month. He told Howard he left the hospital and immediately visited his friend Pete Hartley, who was already building some custom drum pedals for Rick and would eventually help him construct a new kind of kit that allowed him to continue rocking with one arm.

“I sat down for about three or four minutes, played the thing. I was exhausted because obviously I had been laid up in bed. That was it. It was like the spark,” Rick told Howard, adding he went home after that and slept for about a week.

Howard wondered if Rick ever felt the presence of a phantom limb after losing his arm and sure enough, he had. “There was this presence when I first lost my arm. There was this physical presence,” Rick revealed, adding it was “like static electricity was in the form of my arm.”

Rick said he couldn’t control his phantom limb, either, and it apparently once got overly cozy with one of his nurses in the hospital. “It kind of had a mind of its own. It would end up everywhere,” he told Howard. “It just so happened it ended up going up somebody’s skirt.”

“Wow, I don’t know what to say about that,” Howard remarked.

“Yeah, make sure your wallet is zipped up,” Joe joked.