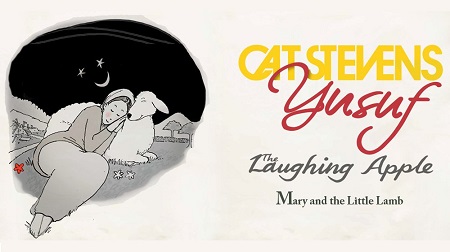 Cat Stevens just released a brand new track from his upcoming album The Laughing Apple. “Mary and the Little Lamb,” a gentle but brightly rendered late-’60s composition with a new verse, can be streamed below. Until now, the new track had previously only existed as a demo and never made it onto a Cat Stevens album.

The Laughing Apple, out in September, will be released roughly 50 years after Cat Stevens’ first album. It reunites him with producer Paul Samwell-Smith and guitarist Alun Davies, prominent collaborators on landmark recordings including 1970’s multi-platinum Tea for the Tillerman.

The album’s artwork features illustrations by Stevens
Stevens illustrated each of the album’s 11 songs in his naïve style, resembling a storybook — themed for those whose hearts have never grown old.