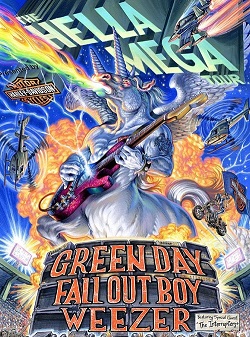 Weezer:  The weezer family is devastated by the loss of our friend and mentor Ric Ocasek, who passed away Sunday. We will miss him forever, & will forever cherish the precious times we got to work and hang out with him. Rest in Peace & rock on Ric, we love you. #RIPRicOcasek #karlscorner

The weezer family is devastated by the loss of our friend and mentor Ric Ocasek, who passed away Sunday. We will miss him forever, & will forever cherish the precious times we got to work and hang out with him. Rest in Peace & rock on Ric, we love you. #RIPRicOcasek #karlscorner pic.twitter.com/JcTXevr6V8

Weezer, also known as the Blue Album, is the self-titled debut studio album by American rock band Weezer, released on May 10, 1994 by DGC Records. It was produced by Cars frontman Ric Ocasek and recorded at Electric Lady Studios in New York City from August to September 1993. Founding guitarist Jason Cropper left during the recording, replaced by Brian Bell.

The album reached number sixteen on the US Billboard 200, and was certified triple platinum. It was supported by the singles “Undone – The Sweater Song”, “Buddy Holly”, and “Say It Ain’t So”, which brought Weezer mainstream success, helped by music videos directed by Spike Jonze. By 2009, the album had sold at least 3.3 million copies in the United States and 15 million copies worldwide. –Wikipedia

From Ric’s sons: Our dad was a prolific doodler. His passing was sudden, unexpected, and beyond heartbreaking. Yesterday, we found this last doodle on his armchair. He couldn’t have known what it would end up meaning to us. We love him so much. pic.twitter.com/bJNpXSQgDO

We will remember #RicOcasek for many reasons-his friendship, his artistry, but most of all for his generosity. Here was a bona fide legend, who seemed to care as much about our record as we did. Which was a huge thrill, of course. A star through and through. RIP Ric, love you x pic.twitter.com/EvNjqzHotw

Ahh man, say it ain’t so. I loved Ric Ocasek. What an interesting, smart, kind, funny man who made incredible records. I loved those Cars albums when I was a teenager. Perfect pop songs with those wicked elliot easton guitar solos. Absolute candy. Then he went and produced Rock For Light by the Bad Brains. As an adult I met him several times and he was gracious, funny and engaging. Ahh man. Ahh damn. Bless his soul. R.I.P. Transcend to the other side Ric. So much love and appreciation from me. You’re All I Got Tonight.

Back to back “one-two punch” for rock music in one weekend, damn. Eddie Money & just now, Ric Ocasek of The Cars . Full disclosure: In high school, my friends & I always gravitated more towards music that offended & defied convention: The screaming guitars of Van Halen & Ozzy, the screaming (literally) of Halford & Dio, the shock of Kiss & Alice, the complexity of Yes & Rush, the sexual boundary-pushing of Prince (& for that matter, Plant) the weirdness & cultural critiques of Zappa etc etc…But what’s interesting about both these guys’ work is that despite its relative “safeness” (it fit none of the above descriptions, was generally accepted by mainstream gatekeepers, was never threatened with censorship, didn’t cause concern by parent/teacher groups or DC Congressional Committees), it somehow occupied that safer space while being liked by those of us into the more unconventional (even dangerous, if you will) side of music. No, my friends & I didn’t wear Eddie Money or The Cars T-Shirts; we didn’t hang up their posters; we didn’t run out to buy their albums or attend their concerts..But you know what else we didn’t do? We didn’t turn the dial when they came on the radio (and these guys were ALL over the radio)! It may have been “safe” sure, but the songs were undeniably good, the hooks incredibly strong – so strong, in fact, that I can’t even look at titles like “Just What I Needed” & “Let The Good Times Roll” or “Shaken” & “Two Tickets to Paradise” without the songs getting stuck in my head! And I can only imagine their pressure to do some stupid gimmick or rely too much on image in their area of radio friendly rock, but they did not. Even after MTV, they kept it real, just a couple dudes who happened to make super-catchy, fun to listen to music. I met Eddie once – a former guitar tech of mine worked with him for many years – he struck me as down to Earth funny and a great guy. I have heard the same about Ric, though we never met. These two may be more associated with early mid 80s , an era long past, but they were great guys and true artists who will be missed & remembered for many years to come. RIP #eddiemoney & #ricocasek #Thecars

For peeps who don't FB . . . worth a screen shot. Dude, this is beautiful, and so are you. And so was Ric. pic.twitter.com/nxqVlBkAAP

Previous: Liam Gallagher, “I Have Never Begged For A Part In Peaky Blinders”
Next: Vinnie Moore ‘Soul Shifter’ New Album 2019