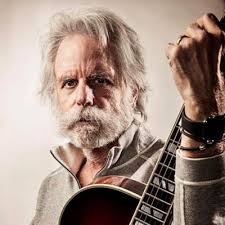 Bob Weir: Gymming with Men’s Health! If you’ve been curious about those gymming methods of mine, Ross McCammon with Men’s Health nailed it. Appreciate the feature! #GratefulShred – Read the Interview

I got hit with a chop block when I was a defensive end in high school. My ankles were weak for years,” says Weir, in full canter now, starting to sweat a little. “So when I became an exercise junkie in my 20s, I used to turn my ankles a bunch. Anyway, I had a friend, a Shoshone healer. Rolling Thunder. I used to see him work on people with an owl’s wing and cedar smoke. I said, ‘Chief, would you consider doctoring my ankles?’ He stood me up and said, ‘When you’re running, have you ever thought about looking down at where you put your feet?’ ”

Here he pauses for effect.

“And I haven’t turned my ankle since.” – READ MORE