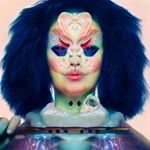 Björk:  Sooo delighted to share with you the live version of “The Gate” from Later… with Jools Holland!!!!  Also a little overexcited to share my flute arrangements with you , they are played by flute septet viibra.  They have gracefully made those notes their own and added some dancesteps choreographed by Margrét Bjarnadóttir.  Thanks to Doña Arca for writing and producing this with me, warmthnesss.”

Björk performed “The Gate” on Later… with Jools Holland on BBC Two (26 May 2018). The singer is currently promoting her ninth studio album, Utopia, which was released on November 24, 2017 via One Little Indian Records.

Utopia was mostly produced by Björk and Venezuelan electronic record producer Arca. The album peaked at #75 in the United States on the Billboard 200 chart and #25 in the United Kingdom.