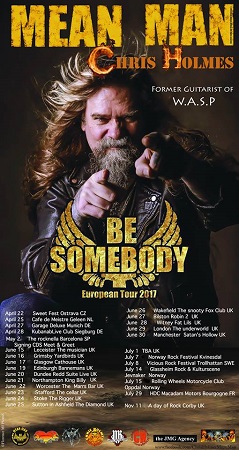 Former W.A.S.P. guitarist Chris Holmes kicks off his “Be Somebody” European tour with his band Chris Holmes’ MEAN MAN on April 22nd. Chris Holmes’ Mean Man live sets include plenty of W.A.S.P classics and audience interaction. Each night three members from the audience are invited onstage to join in on the W.A.S.P hit “I Wanna Be Somebody”, plus free meet and greets are organized at the end of each gig at the merch booth. Don’t miss your chance to meet one of the baddest MF’ers from the 80s!