Guitar World: Warren DeMartini, Steve Stevens, Lita Ford and an all-star panel share their guitar highlights of the ‘80s. You can check out the entire all-star panel @ this location.

An excerpt from the feature has been provided below. 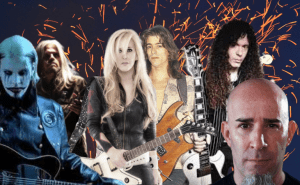 Scott Ian (ANTHRAX)
GREATEST GUITAR SOLO: Mr. Crowley, Randy Rhoads. His 1-2-3 punch of chops, technique and melody make this solo the one that not only stands out above all his other work, but above everyone else’s in the Eighties. And it’s fun to “air guitar” to!
BEST RIFF: AC/DC’s Back in Black came out in 1980 and set the tone for the rest of the decade.
ULTIMATE GUITAR ALBUM: Blizzard of Ozz by Ozzy. Randy tops Eddie [Van Halen’s] Women and Children First by a nose hair – and only because he was the new kid and it was all very exciting to hear someone come along A.E. – after Ed – and give us all ear boners.
PIECE OF GEAR THAT SCREAMS ’80s: The Floyd Rose! Eddie, Randy, Alex, Kirk, Dave, Steve, Joe, Neil, Kerry, Jeff, Vernon, me! etc., etc. They’re all first-name basis guitar players who used Floyd’s – and this is only the tip of the iceberg.
GUITARIST OF THE DECADE: Randy Rhoads
GREATEST SHREDDER: Steve Vai
UNDERAPPRECIATED HERO: Ty Tabor of King’s X. Ty’s playing on their two Eighties albums is wholly original. His tone is incredible, his feel, his sense of melody. He’s a monster. You need to listen to King’s X.
BEST MOVIE: Raging Bull
GREATEST HAIRSTYLE: Mike Score of A Flock of Seagulls
ULTIMATE EIGHTIES ACCESSORY: My Walkman Sport

John 5 (ROB ZOMBIE)
GREATEST GUITAR SOLO: Beat It. It really is just pure perfection.
BEST RIFF: Lay It Down by Ratt
ULTIMATE GUITAR ALBUM: Rising Force by Yngwie Malmsteen
PIECE OF GEAR THAT SCREAMS ’80s: My Boss Heavy Metal pedal.
GUITARIST OF THE DECADE: Steve Vai
GREATEST SHREDDER: Paul Gilbert came on the scene with Racer X and changed my life forever.
UNDERAPPRECIATED HERO: Vinnie Moore
BEST MOVIE: Crossroads with Ralph Macchio and Steve Vai – one of the best!
GREATEST HAIRSTYLE: My good friend Nikki Sixx had the coolest haircut in the Eighties.
ULTIMATE EIGHTIES ACCESSORY: My record collection. Without it, I wouldn’t be who I am today.

Mark Tremonti (CREED)
GREATEST GUITAR SOLO: Jeff Beck’s People Get Ready, a great example of the pure emotion that one of the best players that ever lived is capable of laying down.
BEST RIFF: Lay It Down by Ratt. It is just that classic Eighties metal-era iconic riff that everybody’s learned over the years.
ULTIMATE GUITAR ALBUM: Stevie Ray Vaughan, Texas Flood
PIECE OF GEAR THAT SCREAMS ’80s: The ADA MP-1, a rack-mounted guitar processor. I never got the MP1, but I did have the MP2.
GUITARIST OF THE DECADE: Eddie Van Halen, hands down.
GREATEST SHREDDER: Eddie Van Halen. He’s the godfather of shred guitar and put that style of playing on the map.
UNDERAPPRECIATED HERO: Neal Schon.
BEST MOVIE: Crossroads was one of the reasons I wanted to start playing guitar. The “cutting heads” scene is one of the most iconic guitar movie scenes of all time.
GREATEST HAIRSTYLE: Dee Snider
ULTIMATE EIGHTIES ACCESSORY: The Rockman Sustainor rack that Tom Scholz created.

Marty Friedman (MEGADETH)
GREATEST GUITAR SOLO: Wuthering Heights by Pat Benatar (Neil Giraldo)
BEST RIFF: Here It Comes by Ezo
ULTIMATE GUITAR ALBUM: Crimes of Passion by Pat Benatar. Every solo is totally different, and every song has lots of unique and very effective guitar work.
PIECE OF GEAR THAT SCREAMS ’80s: Quadraverb
GUITARIST OF THE DECADE: It would be impossible to choose one, probably thanks to the high standard set by EVH.
UNDERAPPRECIATED HERO: Steve Lukather. People know how great he is, but many are not aware that his massive body of musical work is so overwhelmingly expansive and diverse that there are literally no rivals as far as I know.
BEST MOVIE: The Last American Virgin
GREATEST HAIRSTYLE: The bass player on the first Cinderella album cover.
ULTIMATE EIGHTIES ACCESSORY: Hair

You can check out the entire all-star panel @ this location.