Interview w/ Guitarist Chris Poland – Talks Megadeth, Drugs, Killing is My Business, Peace Sells: “The drugs that we were doing…You’d do it, and then you’d be able to work all day” – 2022 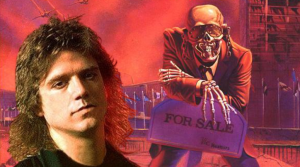 This is a full in bloom interview with Megadeth/OHM guitarist Chris Poland.

An excerpt from the interview has been transcribed below.

Chris talks about Megadeth, Gar Samuelson, Dave Mustaine, David Ellefson, Slayer’s Kerry King, drug use during Killing is My Business and Business is Good and Peace Sells but Who’s Buying.

full in bloom: What was your impression of Dave Mustaine’s playing when you first heard him?

I don’t know. There was a lot of drinking going on. The songs were awesome. You knew it was Dave when he played. It just wasn’t the tone I would’ve chosen. As time went on, Jesus, when he made ‘Rust in Peace’ that’s when he really started to get his guitar tone dialed in.

full in bloom: Yeah, to me, that was kind of the peak. Although, ‘Peace Sells’ is my favorite album.

Yeah, I know. His playing on ‘Peace Sells’ is like, it has got that Jimmy Page stagger, but it’s still like dead on. And that’s what was cool is because we were different guitar players and I think that’s what made it, hard-left and hard-right, two different guitars that sound different and were played different is why it gave it that character.

full in bloom: Just to confirm, you guys both played the rhythm tracks, correct?

full in bloom: So, Dave cut all rhythm tracks on ‘Killing is My Business?’

99% of them, yeah. There was a big buzz on that record when it got released, so when we did ‘Peace Sells…’ ‘Peace Sells,’ the reason that record sounded so good is because we did so many tours before we went in to record the record, we knew what worked live. We went right into the studio, coming off the road, so we were really ready to make that record, and we did it in thirty days, man.

full in bloom: And you guys were playing songs from ‘Peace Sells’ on the “Killing is My Business’ tour, right?

Yeah, absolutely, before the record even came out, we were playing them live.

full in bloom: Do you recall which ones specifically?

The first record was hard, man. Those rhythm parts were hard to play. Even the rhythm parts on ‘Peace Sells’ weren’t easy. That’s why Gar (Samuelson) told me, “This band is really challenging, and you won’t get bored, trust me.”

On Drug Use During the Recording of ‘Killing is My Business’:

The drugs that we were doing, it wasn’t like that. You’d do it, and then you’d be able to work all day. Nobody was like falling down or drooling or anything. It was just something that we did.

full in bloom: How did you end up getting into drugs, like even shooting up? How did you get into that?

Well, it got to the point where we were snorting it. The people I would buy it from would tell me, “You’re wasting hundreds of dollars doing that,” and we were running out of money. One day I just thought, “Well, I’m going to see if I can do this.” I sat down and tried to do it and wound up figuring it out, and the rest is history.

full in bloom: But that’s also prior to joining Megadeth, correct?

Oh, no. I didn’t start shooting up until I was in Megadeth.

full in bloom: I thought you and Gar were kind of the experienced ones on that end and Dave and David were…

Oh, yeah. No, we were doing heroin. During that time when I was like, working for those guys. I was going out on the road with them and kind of helping with the equipment, going to gigs when they were a three-piece. That’s when I started (shooting up), money was scarce, and I just figured it out.

full in bloom: And that starts on ‘Killing is My Business?’

Somewhere in that time period, yes. Sometime, I think, before the recording. But those guys weren’t strung out. They were what people call, ‘chipper/chipping,’ when they just do it once in a while. It wasn’t a habit for them yet. It didn’t become a habit until ‘Peace Sells.’

The entire Chris Poland interview segment is available via the embedded video clip below.

Previous: MTV’s Riki Rachtman Tours Cathouse Hollywood as it is in 2022: “Stephen Pearcy from RATT told me he used to like doing cocaine in there” – VIDEO
Next: Sammy Hagar Said He Was Approached For Van Halen Tribute: “It’s really not Van Halen without Eddie” – 2022 – Interview