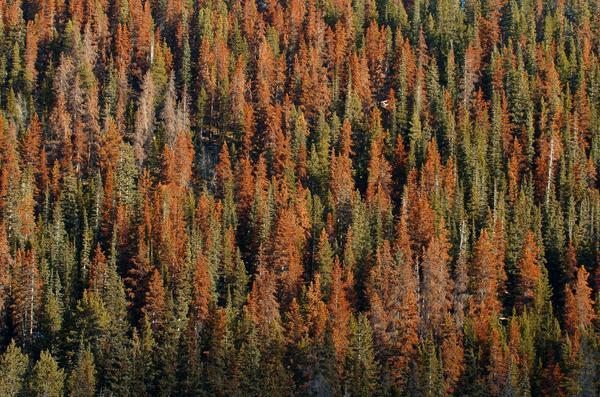 Since 2010, the amount of standing dead trees has jumped 30%, totaling 834 million, according to an annual Colorado survey – that’s 1 out of every 14 trees! Most of the die-off can be attributed to insect infestations, particularly the Pine Beetle and Spruce Beetle.

On Tuesday, the Report on the Health of Colorado’s Forests detailed the current state:

From Wikipedia:
The current outbreak of mountain pine beetles is ten times larger than previous outbreaks.[21] Huge swaths of central British Columbia (BC) and parts of Alberta have been hit badly, with over 40 million acres (160,000 km2) of BC’s forests affected.[22] Under the presumption that the large areas of dead pine stands represent a potential fire hazard, the BC government is directing fuel management activities in beetle areas as recommended in the 2003 Firestorm Provincial Review.[23] Harvesting affected stands aids fire management by removing the presumed hazard and breaking the continuity of the fuels. These fuel management treatments are specifically designed to reduce interface fire threats to communities and First Nations located in the infestation zone. The interface is the area where urban development and wilderness meet.

Since 2004, Alberta has spent more than $414 million on pine beetle control.

As of May 2013, the Pine Beetle is aggressively devastating forests in all 19 Western States and Canada, effectively decimating approximately 88 million acres of timber at a 70-90% kill rate. Over 13,000 miles of power lines are being endangered with falling trees that increasingly raise the risk of fires that could cause widespread problems for millions of people. The mountain pine beetle has affected more than 900 miles (1,400 km) of trail, 3,200 miles (5,100 km) of road and 21,000 acres (85 km2) of developed recreation sites over 4,500,000 acres (18,000 km2) in Colorado and southeastern Wyoming; other outbreaks encompass the Black Hills of South Dakota and extend as far south as Arizona, and as far north as Montana and Idaho. The US Forest Service is working on a hazard tree removal strategy, prioritizing high-use recreation areas, such as campgrounds, roads and National Forest Service lands adjacent to vulnerable public infrastructure such as power lines and near communities.

• The Spruce Beetle epidemic has killed trees across 1.7 million acres

The current pine beetle infestation has been attributed to Colorado winters, which no longer get or stay cold enough to kill the beetles. It has also been suggested that rising summer temperatures may accelerate beetle development.

From Wikipedia:
Mountain pine beetles affect pine trees by laying eggs under the bark. The beetles introduce blue stain fungus into the sapwood that prevents the tree from repelling and killing the attacking beetles with tree pitch flow. The fungus also blocks water and nutrient transport within the tree. On the tree exterior, this results in popcorn-shaped masses of resin, called “pitch tubes”, where the beetles have entered.[8] The joint action of larval feeding and fungal colonization kills the host tree within a few weeks of successful attack (the fungus and feeding by the larvae girdles the tree, cutting off the flow of water and nutrients). When the tree is first attacked, it remains green. Usually within a year of attack, the needles will have turned red. This means the tree is dying or dead, and the beetles have moved to another tree. In three to four years after the attack, very little foliage is left, so the trees appear grey.[3]

As beetle populations increase or more trees become stressed because of drought or other causes, the population may quickly increase and spread. Healthy trees are then attacked, and huge areas of mature pine stands may be threatened or killed. Warm summers and mild winters play a role in both insect survival and the continuation and intensification of an outbreak. Adverse weather conditions (such as winter lows of -40°) can reduce the beetle populations and slow the spread, but the insects can recover quickly and resume their attack on otherwise healthy forests.

Other Areas of Concern:

• Before 2050, average temperature increases by 2.5 to 6.5 degrees can be expected. This would result in an increased risk of severe wildfires, insect infestations and droughts.

“When so many trees die and large wildfires follow, our forests quickly turn from a carbon sink into a carbon source,” state forest service director Mike Lester warned. “Beyond the implications for our atmosphere, forests in poor health have implications for our water supplies, public safety, wildlife and recreation opportunities.”

Isn’t the forest regenerating?
“That’s our new forest. Now, I would much rather have a new forest without 800 million dead trees standing all over it,” Lester said.

“It’s more evidence the climate is changing and that it is having dramatic impacts”, Ted Zukoski, attorney for the environmental advocacy group Earthjustice advised. “We need to take strong action to address it.”

State forest officials urged lawmakers to increase efforts to protect watersheds and manage wildfire risk. As part of the forest restoration, they proposed to plant more seedlings and improve insect detection and responses.