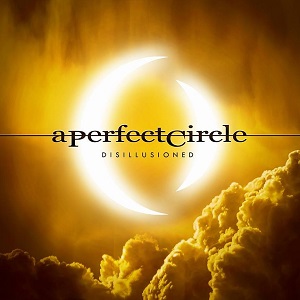 A Perfect Circle released a brand new track called “Disillusioned,” which can be heard below. You can pre-order the limited edition 10” vinyl (“The Doomed” / “Disillusioned”) at this location.

On the status of the band’s long-awaited album, guitarist Billy Howerdel recently stated that they are “well over the midway point.”  “I’ve got a studio on the road, and Maynard [James Keenan]’s still working and he’s still writing,” Howerdel explained.  “It’s tough on the road; I knew it was gonna be hard, but it’s been tougher than I thought it would be to bet in a groove and keep going. But we’re about to have a stretch here in about a week when I think it’s going to be time to get a lot done.”