Helloween’s latest album, My God-Given Right, has been certified gold in the Czech Republic, selling in excess of 5000 copies. The video above features lead vocalist Andi Deris and guitarist Michael Weikath thanking the fans. My God-Given Right was released on May 29, 2015.  It is their seventh consecutive album produced by Charlie Bauerfeind and was recorded between October 2014 and February 2015 at the band’s MiSueno Studio on the isle of Tenerife.

In November 2016, Helloween announced the Pumpkins United Tour for 2017 and 2018. The tour welcomes back vocalist Michael Kiske, guitarist Kai Hansen and will include all current members as well. 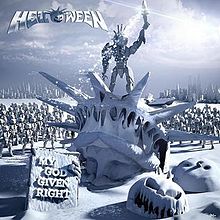