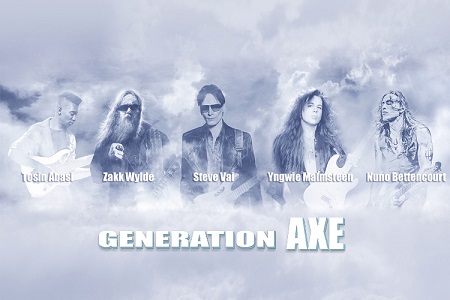 Generation Axe, a tour featuring Steve Vai, Zakk Wylde, Yngwie Malmsteen, Nuno Bettencourt and Tosin Abasi performing songs from their various catalogs as well as joining forces on some well-known songs, is currently touring Asia. The legendary guitarists just performed in Tokyo, Japan, fan-filmed footage of Malmsteen and Vai jamming together can be viewed below.

From the official website: “The concert that fans will experience on the Generation Axe Tour will go way beyond simply gathering five guitar greats on one stage to jam. Each tour stop will include a variety of performances in different configurations amongst the five players, including performing together as one cohesive band, including Pete Griffin (Zappa Plays Zappa) on bass and Derek Sherinian (Dream Theater) on keys and JP Bouvet on drums. Making this rare tour experience even more special, Generation Axe VIP packages will be offered, giving fans meet and greet access to these guitars masters and one-of- a-kind memorabilia”