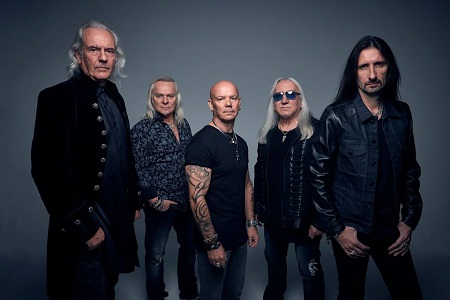 Uriah Heep are set to commence the recording of their brand new studio album (the 25th in their storied career), which will be titled, appropriately enough, Living The Dream.

“We have been together for 47 years and we have seen many bands come and go, so in effect we are ‘Still Living The Dream,’ so it was the perfect title for the new album,” says Uriah Heep guitarist and founding member Mick Box.

Jay Ruston has been called in to produce the album. “We chose Jay because we admire his work with The Winery Dogs, Stone Sour, Black Star Riders, Paul Gilbert, and Europe,” Mick explains.  “Jay has either produced, mixed or both for these bands, and he will bring a fresh approach to Heep, which we are very much looking forward to.”

Living The Dream is expected to be released worldwide in the fall of 2018.

Uriah Heep debuted in 1970 with the release of one of hard rock’s milestones, Very ‘eavy… Very ‘umble, and have since sold in excess of 30 millions albums worldwide. To this day, the band still consistently tours the world, playing up to 125 shows a year to 500,000+ fans.