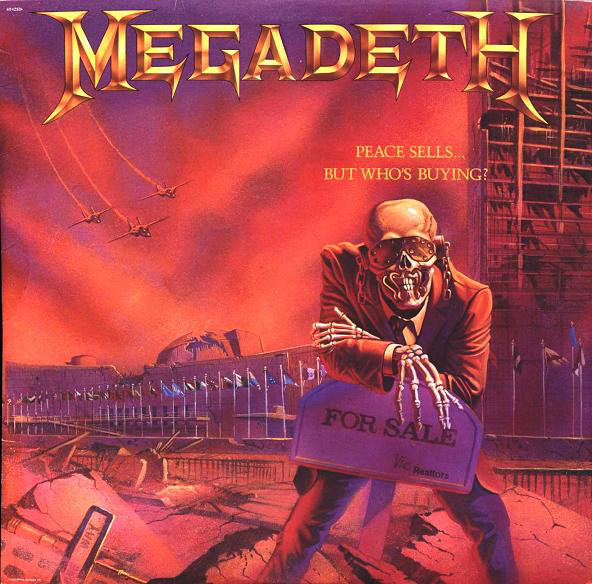 MEGADETH’s David Ellefson spoke to 93.1 WMPA’s “In The Basement With Jesse Bruce” about the creation of the bass intro to the song “Peace Sells”, from the band’s 1986 album Peace Sells… But Who’s Buying?

“It’s funny,” Ellefson said (hear audio below). “Dave [Mustaine, MEGADETH guitarist/vocalist] and I were living with our producer from our first record, Killing Is My Business; his name’s Karat Faye. We were living up in a bungalow in Hollywood Hills and Laurel Canyon. We were so poor. We had no electricity. I think we were getting electricity via a cable, like an electrical extension cord from a neighbor. We were on hard times, if there ever was one. And Dave picked up… I had a bass. It was a bass that I had ripped the frets out of. He picked it up and he started playing it. And that riff basically then became the guitar riff of the song, the bass riff of the song. We went to rehearsal that night, and that song literally wrote itself right there in the band room. And I’m a firm believer that great songs do that — they just write themselves.”

MEGADETH’s DAVID ELLEFSON: How The Bass Intro To ‘Peace Sells’ Was Written https://t.co/ycwc6UHWVN