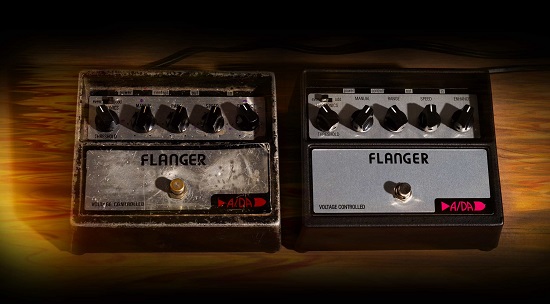 In the video below, Pro Tools expert James Ivey takes a look at the new UAD A/DA Flanger plug-in, comparing the slightly grainier sounding 1979 model with the 2009 reissue unit. James mimics several Pink Floyd effects and riffs in this plug-in overview. Watch the video below.

Revered as “the Holy Grail of Flangers,” the A/DA Flanger took on mythical status in the late ’70s and early ’80s with its deep and colorful brand of analog flanging. Equal parts extreme, musical, and versatile, the A/DA Flanger is easily the most intense sounding pedal flanger ever made.

Developed by Brainworx, and officially endorsed by A/DA and its founder Dave Tarnowski, the A/DA Flanger plug-in is an exacting emulation of this iconic unit, exclusively for UAD-2 hardware and UA Audio Interfaces.

Mythic Modulation
Powered by the Panasonic MN3010 bucket-brigade circuit, the A/DA Flanger delivers everything from faux steel drum sounds to ultra-wide, slow, arcing contour for unmatched texture and resonance. And while most flangers offer a 20:1 time delay ratio, the A/DA Flanger offers a whopping 40:1 ratio. “When it sweeps up, it sounds like it sweeps to zero time delay,” says creator Dave Tarnowski. “It actually goes to infinity, which is what true tape flanging sounds like.”