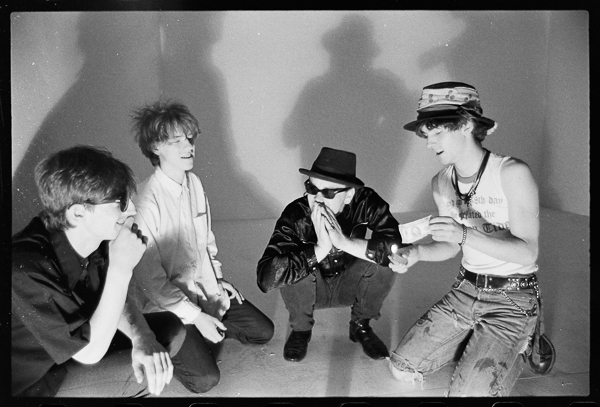 Founded in Seattle in 1981, the U-Men toured extensively throughout the United States until the group parted ways in 1989.
The band’s ‘raw’ sound stood as a precursor for the later grunge bands of the 90s.

More on the U-Men from Mudhoney’s Mark Arm:
The U-Men are one of the best bands I’ve ever seen. They were hypnotic, frenetic, powerful and compelling. It was impossible to resist getting sucked into their weird, darkly absurd world. They effortlessly blended The Sonics, Link Wray, Pere Ubu, and Captain Beefheart. Their shows were loose-limbed, drunken dance parties and no two shows were alike. The U-Men were avant garage explorers and, most importantly, they fucking rocked. I was lucky enough to live in their hometown and I saw them every chance I could.

From 1983 to 1987, the U-Men were the undisputed kings of the Seattle Underground. No one else came close. They ruled a bleak backwater landscape populated by maybe 200 people. They were the only band that could unify the disparate sub-subcultures and get all 200 of those people to fill a room. Anglophilic, dress-dark Goths; neo-psych MDA acolytes; skate punks who shit in bathtubs at parties; Mod vigilantes who tormented the homeless with pellet guns; college kids who thought college kids were lame; Industrial Artistes; some random guy with a moustache; and eccentrics who insisted that they couldn’t be pigeonholed: all coalesced around the U-Men.

Sub Pop co-founder, Bruce Pavitt released the first record by the U-Men, a 4-song 12” EP on Bombshelter Records. By the time they had recorded songs for another record, Bruce was too broke to release it on his proto-Sub Pop label, so he hooked them up with Gerard Cosloy at Homestead Records. This was a big deal. Homestead had a heavy rep at the time with recent releases by Foetus, Nick Cave, Sonic Youth, and Big Black. I was sure that the release of their second 12”, Stop Spinning, would propel the U-Men into the ranks of those Homestead acts and the worldwide underground would get hip to Seattle’s finest.

The U-Men bought a pink school bus and made a couple of valiant attempts at touring. Touring was tough in those days. You’d arrive in town and learn that the show you thought you had fell through. Communication was difficult and long-distance phone calls were expensive. The band stayed in Austin for a month just to play two shows. They became fast friends with Poison 13, Butthole Surfers, Scratch Acid, The Hickoids, and Tales of Terror. Without any income they starved. Starvation and stress amplified fractures within the band and soon bassist Jim Tillman was out. That was the end of the classic line-up of the U-Men.

They remained a very good band, but with Jim they were a great band and they never quite recovered. They recorded two fantastic singles, but something was missing live. They must have sensed it because they played fewer and fewer shows. They recorded their one full-length album, Step on a Bug, for Black Label which was run out of Fallout Records. They became increasingly disenchanted with the direction the Seattle underground was heading and called it quits in 1989. The U-Men had nothing to do with Grunge. They were their own unique thing. I loved them and I still miss them.

I remember thinking at the time that most of their recordings were a little soft and didn’t capture the power of the band live. Now, thirty years later, their records sound great to me and we are lucky that they exist. I’m stoked that Sub Pop compiled these long out-of-print records and scrounged up some unreleased songs so that everyone has a chance to take a trip back to old weird Seattle.