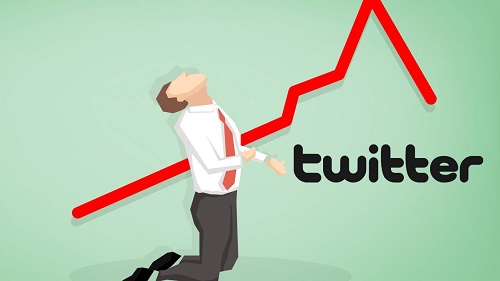 You would think the attention Donald Trump brought to Twitter that their revenue growth would not be the slowest since the company went public four years ago.  The news reignited fears that rivals Facebook and Snapchat were the true kings of online advertising.

Year-over-year advertising was down and although there was a 4% increase in users it still fell short of expectations.  The news resulted in shares dropping another 10%, to below $16.00, a stock that once traded at nearly $70.00 a share.  No guidance offered, just Chief Executive Jack Dorsey asking for your patience.

On Thursday Dorsey spoke with analysts on a conference call explaining that Twitter was investing in machine learning and continuing to search for ways to engage advertisers.

“It will take time to show the results we all want to see, and we’re moving forward aggressively. The whole world is watching Twitter,” he said.

What’s sad is that Wall Street condemns Twitter because they haven’t found the magic formula to attract more new users or advertisers.  I love Twitter, much more than Facebook and Google, unrelated, I know, but not really.  I am here to tell you, there is no magic formula.  The formula = squeeze the reach of your users / businesses and put a stranglehold on posts and results.  Just a few years ago your Facebook post would reach all of your friends but over time that reach has become less and less.  Now Facebook’s “magic formula” only allows your post to reach around 10% of your friends.  Have you ever wondered why so few friends like your articles compared to 5 years ago?  Also, didn’t they get busted for cheating advertisers?  I spent a small fortune advertising and nothing came of it.  At 3 AM in the morning Facebook was showering me with likes;  each time I refreshed the screen, which were in 1 to 2 second intervals, there would be 200 to 300 more likes.  It ended up being a total of thousands.  Were they real?  I am guessing, ABSOLUTELY NOT!  But who knows, they don’t allow you to see all the people that liked your page, just a small portion.  I wrote them 3 or 4 times but never once received a response.

Once Google got wind of what Facebook was doing, they quickly followed suit.  They patented an algorithm that brought all the big companies to the top of the results, forcing the smaller businesses to pay.  You can’t even keep up with Google’s algorithm changes.  They are so frequent it reeks of desperation.  Every few months they do something that ensures businesses will be forced to advertise, many times at the cost of worthwhile results, which is what made Google great.  Sadly, once you file that IPO you are now required to pursue profits at almost any cost.

What I love about Twitter is when you follow someone, you get just what you asked for, their stories & news.  They’re not limiting your reach and forcing you to pay to “boost” your post.  Also the site is fast, unlike Facebook who is starting to have load times that rival MySpace.  Sometimes it will take me 5 minutes to get that stupid menu to come down just so I can log out, it’s like what happened with Yahoo Mail.  Stay the course, don’t ruin your site like the others and keep searching for a different solution.  Please stay great Twitter!