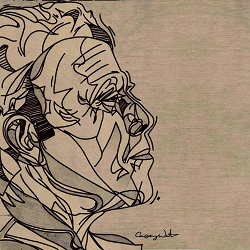 Tom Waits:  “I guess we have to accept it is true. Larry Taylor, known and loved by our family and longtime comrade in musical adventures, is dead. The eloquence of his talent is evident in the many recordings and live show bootleg videos and TV performances that featured his musical muscle. All are a testament to his singular intimacy with music and his fellow musicians and most of all to his lock solid, raw and visceral embrace and touch with the upright bass. You could hear the secrets and ghosts of the blues from every region and tradition in his playing.

“Everything that Larry was…knowing, hilarious, obstinate, short fused, direct and unflinching in his complaints and opinions…is there in the dig- into- it rhythms of his playing.

“Many songs were first tried with just the bass and guitar or piano.…Larry often served as the bed and the rock and the scout of a song’s destination. We fought. I can’t tell you how many times he threw the bass down in disgust, proclaiming, “I am not feeling it. I can’t play this shit,” only to be coaxed back into the song and not only playing it, but helping to define it. When you heard him say, “yeah, this is the real shit,” you felt a perverse sense of pride and satisfaction. That’s the thing, when good musicians get together everyone is pulling, pushing, and finding stuff in each other that they didn’t even know was there.

“We will miss you Larry, and we love you. Tom, Kathleen, and family”