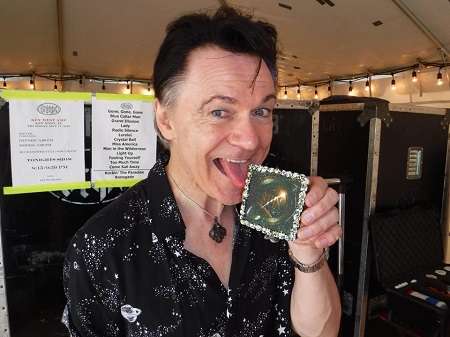 AMFM Magazine recently chatted with Styx vocalist/keyboardist Lawrence Gowan.  Excerpts from the interview can be viewed below.

AMFM Magazine: Now you weren’t there for the entire journey, but you’ve been there a long time. But are you still amazed by the sheer numbers – 30 million records sold, 15 albums, Super Bowl appearances – because isn’t this what kids dream of when they pick up a guitar or start playing keyboards?

Lawrence Gowan: I can tell you that no one in the group takes it for granted. Everyone thoroughly enjoys the experience of doing this. I’ve been in the band for 20 years but the band has been around for 47 years – closing in on a half a century is quite astounding for a band. There’s very few that have been around for that long and doing as well as we are. We know the effort it takes for people to come to our shows. We want the experience to be as great as it can be for us and for them every day.

AMFM: I hear there are occasional surprise appearances by Chuck [Panozzo, founder and original bassist]?

LG: Those occasional surprise appearances are becoming less and less occasional. They’re almost permanent. He’s been on the whole tour so far. It all comes down to his health on any given day but when we’re playing 100 shows a year – when I first joined, Chuck was on stage for maybe one and now he’s with us for usually half the time. And on the summer tour I don’t see anywhere he’s decided not to come but if he wakes up any given morning and his health is not in a good place, he tends to know that right away. He’s got so adept to it that I’m more surprised when he’s not on stage with us.

AMFM: And how do the rest of you stay happy and healthy these days on the road? I guess it’s easier than it used to be?

LG: It is easier, actually – funny enough. It’s something we focus on because when you’ve been around this long, you have the youthful energy on your side but you don’t have the youth [laughs]. We’re all 15 years old when the show starts and there’s a built-in workout that we don’t even think about because the adrenaline kicks in and you don’t act anywhere near your age or maturity. [laughs] But throughout the day – as soon as you and I are done chatting, I’ll make a few more calls but then I’ll start on my exercise routine, which includes yoga to limber me up and focuses me on what’s coming up. Everyone in the band has their rituals. I’m also a walker. It’s rare that I don’t walk about 5 miles a day – well, 5.3 yesterday. Isn’t it great when your phone in your pocket tells you? [Laughs] Just exploring cities. I’m the only Canadian in the band so I’m the foreign guy and America is a very exciting place to me. That’s part of how I stay in shape and the other guys do similar things.

AMFM: We can’t wait. And I know there will be plenty of musicians and kids who want to be musicians looking up on that stage wanting to do what you do. What would you tell them? Because it’s a crazy business – especially now. But you guys do make it look fun.

LG: Well, I think that comes from doing it so much. We know how it’s going to end – and not from being boastful but because we’ve seen it thousands of times now where there’s a sea of thousands of faces with big smiles on them at the end of the night and that’s a wonderful goal to reach and there are plenty of people that come at the end of their work day to see that kind of celebration going so that’s what really keeps us focused and going and excited and enthusiastic. I don’t give out any advice to young musicians other than to say that music is really its own reward. If you’re lucky enough to have something to where you’re playing in front of thousands of people – fantastic. If that’s meant to be, it’s meant to be. In the meantime, music will still pay you back. Maybe not monetarily, but it will pay you back in all kids of soul-lifting ways that enriches your life in all kids of ways that you wouldn’t have experienced otherwise. So play on, listen on, but keep music close to your life and if you really want to be happy, keep classic rock in your life and come see a Styx show. [Laughs]