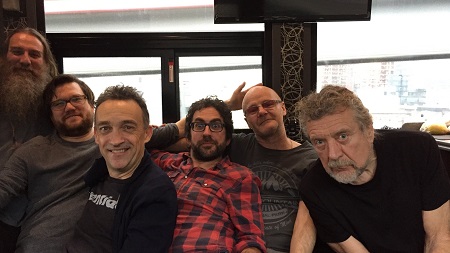 Robert Plant’s 2018 North American tour stopped in New York at the Beacon Theatre on February 14th.  The trek is now headed to Boston for a show on February 16th at the Orpheum Theatre.   A list of remaining dates can be found below.

Robert Plant in Boston
This show is SOLD OUT

Robert Plant: “Fond farewell for now, NYC. On the bus to Boston and Orpheum Theatre.”

Plant is promoting his latest solo effort, Carry Fire, which was released on October 13, 2017 via Nonesuch/Warner Brothers Records. The self-produced eleventh solo album is the follow-up to 2014’s lullaby and… The Ceaseless Roar.

Post pictures/videos of the show and we’ll embed them below.

Robert Plant at the Orpheum in Boston last night was pretty awesome! Time to go explore the city and find some trouble! #CSIKraken pic.twitter.com/YOqQqHsrRm

Robert Plant and The Sensational Space Shifters put on an simply spectacular show here in Boston last! Thanks for the great music to Robert and the guys in the band! pic.twitter.com/rIimRhjiUy

I interviewed Robert Plant for The Boston Globe for a piece that will lead the Arts section on Friday (but it's now online, link below). Always a delight to talk to my all-time favorite artist—the third time I've been fortunate to do so. https://t.co/DvZezfg4I6