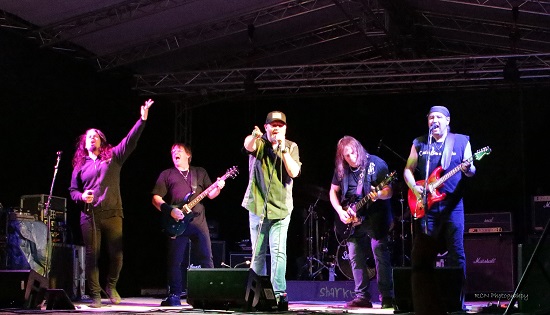 TIM “RIPPER” OWENS, ROSS THE BOSS, AND MARC LOPES JOIN FORCES WITH HELD HOSTAGE FOR A HISTORIC NIGHT OF ROCK TO HONOR OUR HEALTHCARE WORKERS AND FIRST RESPONDERS

This past Saturday (August 8, 2020) at Sharkeys in Liverpool was a “you had to be there” sold out concert. The band Held Hostage (Tom Collier: lead guitars/vocals, Scott Gregg: rhythm guitar/backup vocals, Dave Carroll: bass guitar/backup vocals and Jeff Murray drums), were joined on stage for what can only be described as an EPIC night of rock.

Held Hostage played songs from their new record, ‘Epic,’ that features Tim Ripper Owens on all 12 tracks (available on Metal Mania Records/MVD). They opened the show with the Collier-sung “We’ll Rock For You.” Then on third song of the night, Marc Lopes took the stage and sang 5 songs, starting with “Standback” – a song about how the band started out in an old slaughter house they use to call the shack, and moved to a one room school house they still rehearse and play in. Lopes ripped off 4 more songs, and then legendary guitarist Ross the Boss joined them on stage with Marc, and they rocked a version of the Grand Funk Railroad classic, “We’re An American Band” – with the crowd continuing to go wild. Ross stayed on stage to play on the Held Hostage classic, “Tonight’s the Nite” – dedicated to the late great singer from AC/DC, Bon Scott. One of Ross the Boss’ old friends.

Then it was time for Tim Ripper Owens to join Held Hostage for 6 songs. From the second Ripper hit the stage, the crowd was roaring. Ripper started with the song “Your Name” and then hit “Turn the Light On”, by this point the crowds were going wild and loving every minute of the concert. When Ripper did their hit song “Lightning,” it was a complete frenzy (watch video below). The night ended with what can only be described as an “ending of all endings.” Everyone on stage with Held Hostage, Tim Ripper Owens, Ross the Boss and Marc Lopes finished the night off with the Held Hostage classic song, “Rockin the Nite Away”.

At the end of the song, Ross The Boss and Held Hostage lead guitarist Tom Collier went into dueling leads on the guitars – exchanging back forth and challenging each other with different riffs. The crowd was mesmerized and stunned at what they were seeing. Then they were given a standing (with their masks on) ovation and cheers and screams heard all over. It was truly a historical finish to a fantastic night of honoring our healthcare workers and first responders. All healthcare workers and first responders were given free VIP tickets, meet and greet with the bands, and seating as guests of honor for this once in a lifetime concert.

“It was great to join Tom Collier and Held Hostage to support our first responders!” said Ross the Boss, while Tom Collier added, “Held Hostage has always been known for helping people, and also, bringing in these rock legends was one of the biggest honors of my life, and to be able to share the stage with all of them and play songs from Held Hostage record ‘Epic.’ Also, to play dueling guitars with someone I have always looked up too, Ross the Boss, was a dream come true.” And finally, Ripper described the evening as “A fun show for a great cause, always good to do something for first responders.”