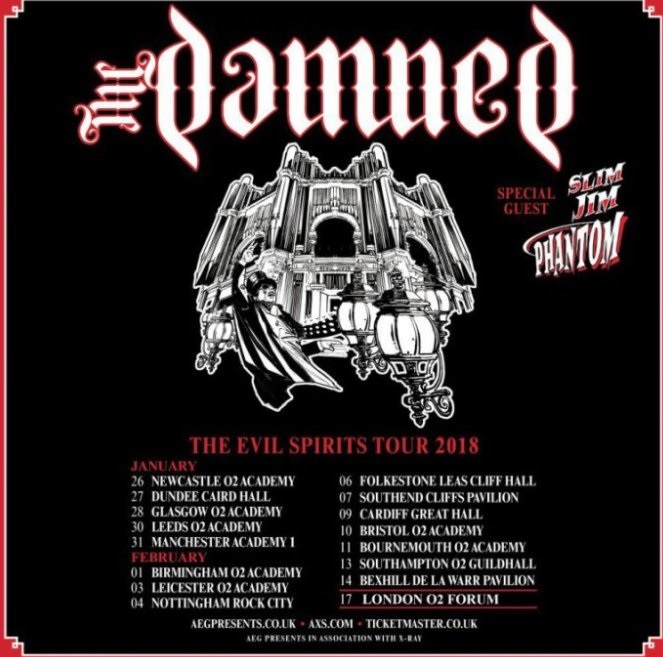 The Damned are gearing up for their UK tour which is set to launch on January 26, 2018 at the O2 Academy in Newcastle. Special guest will be Stray Cats drummer Slim Jim Phantom, who will be backed by The Pretenders. The 16-date trek runs into February and wraps up in London at the O2 Forum. A list of dates can be found below.

The Damned are currently working on their 11th full-length release. The as-yet-unnamed new album will be released via Search and Destroy Records and is the follow up to 2008’s So, Who’s Paranoid?.

The band entered the studio this October in Brooklyn, NY with famed Producer Tony Visconti, who for over five decades has produced some of the world’s most influential artists and their greatest albums (David Bowie, T.Rex, Morrisey, U2, The Stranglers, Iggy Pop and Thin Lizzy). On engineer duties is four-time Grammy-winning producer/engineer/mixer Kevin Killen, who has also worked with Bowie and has spent the last several decades compiling an impressive list of credentials featuring premiere pop artists Peter Gabriel, Elvis Costello, Burt Bacharach, Bryan Ferry and Brandon Flowers.

This news also comes with a change in The Damned’s lineup, after the band announced the departure of bassist Stu West. “We had a great time with Stu on this long journey. We have infinite respect for him and are forever grateful for his contributions to The Damned. As a result of this mutual understanding, we respect his decision, support him wholeheartedly and wish him the best of luck and success.”

Furthermore, the band will once again reunite with former bass player Paul Gray (Eddie and the Hot Rods/Johnny Thunders), who was an essential part of The Damned during the ’80s and who played bass on their previous albums The Black Album and Strawberries.