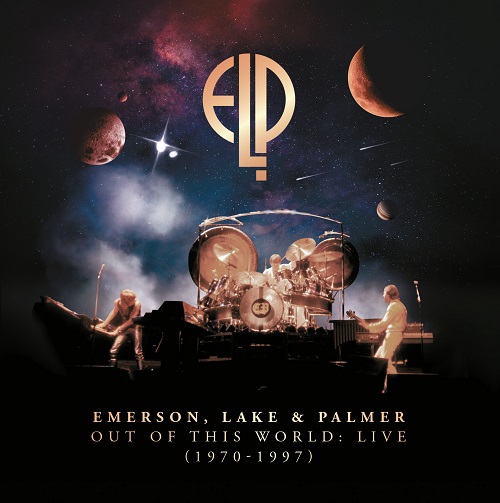 10LP & 7CD, ELP 50th Anniversary Deluxe Box Set showcasing some of the biggest and most important live shows ELP have ever played in their 50-year history

Each LP has been reimagined with beautiful new designs on deluxe gatefold double LPs. Most of the LPs previously unreleased on vinyl

Includes a 32-page, glossy photobook, with intimate and unseen images of the band from legendary photographers including Lynn Goldsmith and Neil Preston. Foreword written by Jerry Ewing editor of Prog Magazine.

‘Out Of This World Live (1970-1997)’ pulls together five of the biggest and most important shows ELP played across their 50 illustrious years. Not only dynamic on record and in the studio, ELP’s audacious live performances provided validation that they could really rock with the greatest. It was a facet of the band which often set them apart from their early 70s peers such as Yes, Genesis, Pink Floyd and Jethro Tull, and yet, as you will hear over the five wonderful live shows contained in this set, it wasn’t all gung-ho bombast. The band members own fondness for classical and jazz allowed Emerson, Lake & Palmer moments of compelling depth.

Most of the LPs are previously unreleased on vinyl, ‘Phoenix 1997’ has never been released. The CDs have been out of print for many years and never released to this standard of artwork and audio. Each Box Set comes complete with a 32-page, glossy photobook, featuring many intimate, rare and unseen images of the band from legendary photographers including Lynn Goldsmith and Neil Preston. Liner notes are provided by Jerry Ewing, editor of Prog Magazine.

“I could not think of a better way to celebrate this anniversary period for ELP. The box set is one of my proudest moments. I know Keith and Greg would agree with me! ‘Out of this World’ is something I will remember for a long time to come. For me, this shows ELP at their very best throughout years of touring and recording. The box set represents the lifeline of our music in our time.” Carl Palmer 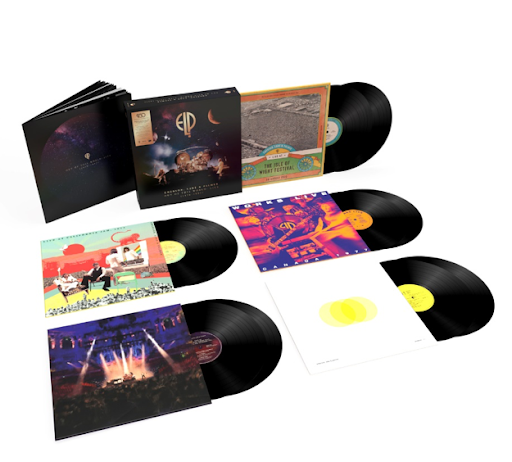 1. Isle Of Wight Festival, Newport, England 29 August 1970
Emerson, Lake & Palmer got off to a dream start with their second ever live show, at the 1970 Isle Of Wight Festival in front of 600,000 fans. If their debut live show at Plymouth Guildhall a week previous had been a success, then the Isle Of Wight show brought the group of already celebrated musicians greater and wider acclaim than their roles in The Nice, Atomic Rooster and King Crimson had previously done. As Carl Palmer noted: “From the second concert we were an international success. It went from nothing to something overnight!”

2. California Jam, California, USA 1974
With no less than five incredible albums under their belts – ‘Emerson, Lake & Palmer’ (1970), ‘Tarkus’ and ‘Pictures At An Exhibition’ (both 1971), ‘Trilogy’ (1972), and ‘Brain Salad Surgery’ (1973), it’s little wonder they were invited to headline the inaugural California Jam Festival at the Ontario Motor Speedway in California on April 6, 1974 on a bill that also featured Deep Purple, Black Sabbath, The Eagles and Black Oak Arkansas.

This particular live set is widely lauded in the annals of ELP gig history, the prodigious musicianship and showmanship was second to none and included powerful solo spots from Palmer and Emerson, the latter performing on a spinning piano suspended 50 feet above the celebrating crowd.

3. Works Live Montreal, Montreal, Canada 1977
The playing field had changed somewhat by the time ELP arrived at Quebec’s Stade de Olympique, Montréal in August 1977. ELP had taken a break following their grueling tour in support of ‘Brain Salad Surgery’. They convened in 1976 to begin work on their ‘Works’ project, which would highlight their individual talents over three sides of vinyl and their collaborative genius on the fourth.

However, stadium-filling rock giants were no longer flavor of the month in 1977. When the band headed out on the road with an orchestra and choir in tow, punk was really starting to make its presence felt. The behemothic tour might have stretched the band’s resources, but by the time they hit Montréal’s Olympic Stadium, their majestic pomp was still on display for all to hear.

4. Royal Albert Hall, London, England October 1992
Having ground to a halt following the 1978 ‘Love Beach’ album, ELP reformed in 1991 and released the ‘Black Moon’ album in 1992. A triumphant night saw the band perform at the Royal Albert Hall in October 1992, and it’s also the fourth show in this Box Set.

5. Union Hall, Phoenix, Arizona USA September 1992
By 1997, the last show included here, the band were still a major draw, but both Emerson and Palmer had suffered different injuries touring in 1993 which hampered recording of the band’s final studio album ‘In The Hot Seat’. Appearing in 1997, at The Union Hall Phoenix, Arizona, there’s no indication of anything amiss. As heard on this previously unreleased recording, Emerson, Lake and Palmer remained a quite formidable live outfit.

The culmination of those 1997 dates would be the last the three would play, save for a one-off 40th anniversary show at High Voltage Festival, London, in 2010. Both Keith Emerson and Greg Lake sadly died in 2016, leaving Carl Palmer to continue to remind people of one of the greatest legacies in the history of rock music with his own ELP Legacy outfit. A legacy that is captured for posterity in ‘Out Of This World: Live (1970-1997’). 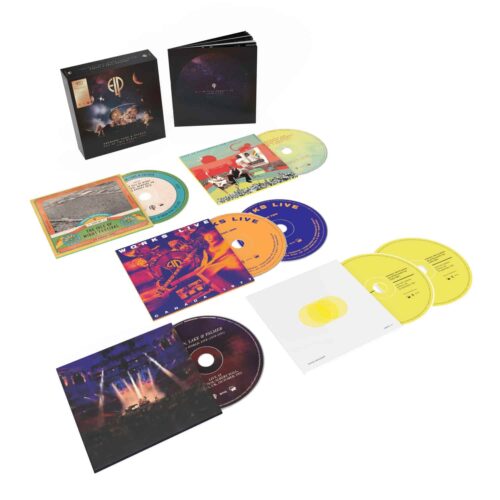