The Claypool Lennon Delirium, featuring Les Claypool (Primus) and Sean Lennon, will be releasing their 4-song EP on August 4, 2017. Limited to just 3000 copies, Lime and Limpid Green originally debuted on Record Store Day 2017 as a 10″ mixed bright green vinyl option, but will now come in clear vinyl with green and double-mint splatter. The EP compiles reinterpretations of songs by Pink Floyd, King Crimson, the Who and Japanese band Flower Travellin’ Band. You can listen to the song “Satori” via the embedded clip above. 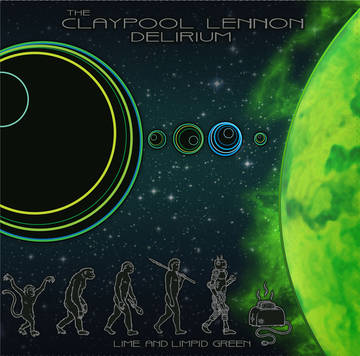 On how the project originally came together: “Sean is a musical mutant after my own heart,” said Claypool. “He definitely reflects his genetics–not just the sensibilities of his dad but also the abstract perspective and unique approach of his mother. It makes for a glorious freak stew.” After some impromptu, backstage jams and an epic live sit-in on Primus’s psychedelic opus, “Southbound Pachyderm,” Claypool approached Lennon about doing a recording project. “I was trying to wrangle up an Oysterhead reunion since Primus was taking a rest for 2016 but the planets just wouldn’t align for that,” said Claypool. “I don’t like sitting around, so when Sean said he didn’t have plans for this next year, we started kicking around the notion of making an old-school, psychedelic/prog record. Next thing I know, he’s staying in my guesthouse, drinking my vino and banging on my drums.”