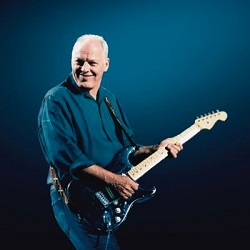 David Gilmour: Very much looking forward to these A Theatre For Dreamers live events in Birmingham, Manchester & London with Polly Samson to celebrate her wonderful new novel. I’ll be performing a few songs, including a new one – “Yes, I Have Ghosts” – which we wrote together, inspired by the book. 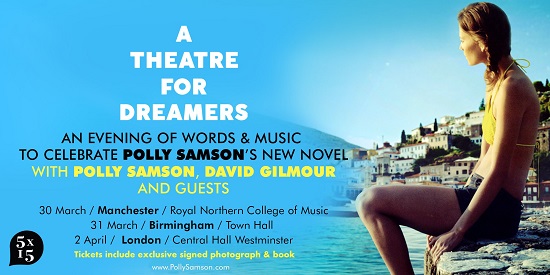 Join Polly Samson and friends to launch her new novel A Theatre for Dreamers at an evening of words and music in Manchester, Birmingham and London.

Each of these special events will feature Polly Samson in conversation with journalist Rosie Boycott, readings, film and live music, including a new song Yes, I Have Ghosts written by David Gilmour and Polly Samson.

The audience will be transported to the Greek island of Hydra in 1960, and a world dancing on the edge of revolution, where a circle of poets, painters, writers and musicians live tangled lives. It’s a story of utopian dreams and innocence lost, of the troubled King and Queen of Bohemia, Charmian Clift and George Johnson, of a young poet named Leonard Cohen, and his Marianne; and of Erica Hart, an 18-year-old in search of answers.

Ticket prices include a signed first edition of A Theatre for Dreamers and an exclusive portrait of Polly Samson and David Gilmour taken on Hydra and signed by them both.

‘In A Theatre for Dreamers, Polly Samson goes to the Greek island of Hydra to imagine the first steps in the love affair between Leonard Cohen and his Marianne. As dreamily nostalgic as Cohen’s song Famous Blue Raincoat’ OBSERVER, Fiction to look out for in 2020

‘Polly Samson has created such a dazzling evocation of an era and its mindset. Here, the island of Hydra is a geographical place but a psychological one too, populated by beautiful and damaged characters who pull you down into its pages for another café gossip, another moonlit swim, another drink. This book is a bohemian idyll meticulously drawn, and unsparingly exposed. It is like going away to paradise, then coming back rather wiser. You don’t read this book – you live it’ MARINA HYDE