Alex Skolnick:  “No sooner had I been planning a regrettably belated post in tribute to Tom Wolfe, who passed just over a week ago, comes news of yesterday’s loss of Philip Roth.  For fans of modern literature, this is a one-two punch on par with music fans experiencing the loss of Bowie, followed by Prince.  On the other hand, it is some consolation that both authors departed this earth after having continued to live and create well into late adulthood, surpassing the average life expectancy (each approaching 90!).  These are my favorite books by each (pictured below), followed by Goodbye Columbus by Roth and Bonfire of the Vanities by Wolfe (not to be judged by the abhorrent movie version that caused actor Tom Hanks to quit Hollywood for a time, rethink things and reemerge to create some of his best work).  All of these books expanded my view of our modern world in ways that are honest and positively invaluable. Essential works I haven’t read yet and plan to shortly: The Plot Against America by Roth (which seems especially relevant at this moment in our history) and The Right Stuff by Wolfe (I know, I know…how can you be a Wolfe fan and not have read The Right Stuff?  I kept meaning to, but he kept coming out with cool new books, A Man in Full, I Am Charlotte Simmons etc etc).  RIP to two greats.” 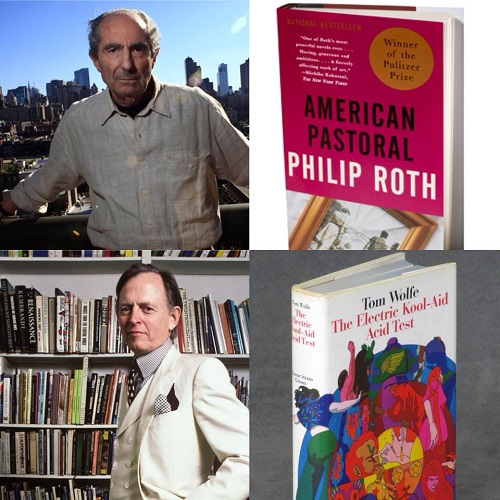