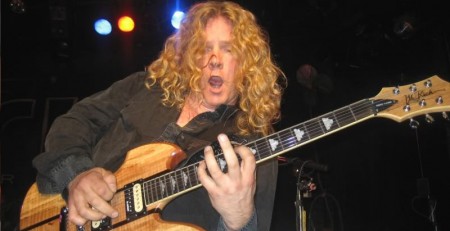 Tesla guitarist Frank Hannon recently spoke with For Guitar Player Only just before he and band head out on Tesla’s Mechanical Resonance 30th Anniversary Tour.  Here are a few excerpts:

FGPO: Tesla has reached 30, and beyond. Pretty surreal. Was this a band that was built to last like that?

Hannon: Well, absolutely it was. But it wasn’t our idea, really. We were so young. But we had some great mentors. When I was 15, 16 years old, we were playing the clubs and writing our own songs and trying to get established, but in order to get a gig you had to play some pretty sappy music, so we were playing the Top 40 of the day. And Ronnie Montrose discovered us and he saw our talent and said: “You guys are gonna go far, but you need to get away from playing these cover tunes and write songs with grit, from your heart, that are real.” So he gave us that good advice.

FGPO: That’s a real artist’s point of view though. Did you have trouble getting that kind of buy-in from the industry?

Hannon: Well, flash forward a few years later and we got discovered by Cliff Burnstein and Peter Mensch, who were managing AC/DC and Def Leppard and Metallica with their company [Q Prime]. We were getting ready to record our first album and sorting through all our songs and writing more songs when Cliff and Peter said: “Guys, remain true to yourself and write songs that are quality. Make an album from start to finish, don’t just write one good song and a bunch of shitty, sappy songs.” They said: “IF you want to have a career and you want to be around in 40 years, make sure you write songs that are from your heart.” We were gonna do that anyway, but it really helped to have them feel that way and be in our corner.

FGPO: You talk about Montrose and the rest of the stable at Q Prime, and you grew up in some pretty heady guitar company. What kind of impact did that make on you?

Hannon: Well, gosh, it’s an honor to share the stage with Def Leppard and Scorpions and the people that we’ve done things with. When I was younger, it inspired me to be as competitive and play as good as I can. But now that I’m older, I realize, again, it’s about the songs and being able to write a song and keep it simple.

FGPO: You’re working on a new album with Phil Collen from Def Leppard. How’s that going?

Hannon: I’d say we’re about 80 percent done. We have about 10 songs that are 90 percent done and we’re going to do some more. Phil has mentored us now for a couple of years, sort of like Ronnie did. He’s been offering us lots of great advice and teaching us a lot of techniques he learned from Mutt Lange, the stuff he learned on the Def Leppard records like Pyromania. It’s going really well. He’s really put a shot in the arm for Tesla. He’s been a big fan of Tesla since 1989, when we first met him.

Read the entire interview at ForGuitarPlayersOnly.com