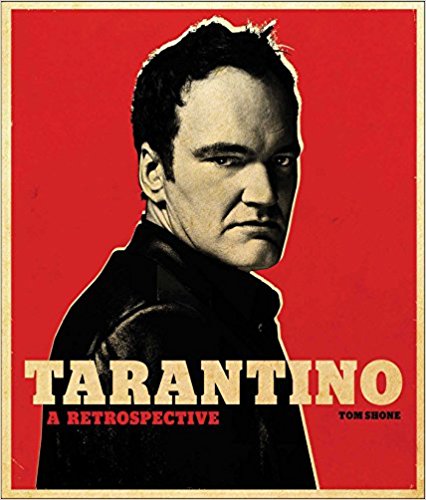 On October 3, 2017, Insight Editions will release Tarantino: A Retrospective, a visually stunning compendium which offers an unprecedented look at some of Quentin Tarantino’s most seminal films of modern time by peering into the fiercely creative mind of the artist behind them.

Born in Knoxville, Tennessee, in 1963, Quentin Tarantino spent many Saturday evenings during his childhood accompanying his mother to the movies, nourishing a love of film that was, over the course of his life, to become all-consuming. The script for his first movie took him four years to complete: My Best Friend’s Birthday, a seventy-minute film in which he both acted and directed. The script for his second film, Reservoir Dogs (1992), took him just under four weeks to complete. When it debuted, he was immediately hailed as one of the most exciting new directors in the industry.

Known for his highly cinematic visual style, out-of-sequence storytelling, and grandiose violence, Tarantino’s films have provoked both praise and criticism over the course of his career. They’ve also won him a host of awards—including Oscars, Golden Globes, and BAFTA awards—usually for his original screenplays. His oeuvre includes the cult classic Pulp Fiction, bloody revenge saga Kill Bill Vol. 1 and Vol. 2, and historical epics Inglorious Basterds, Django Unchained, and The Hateful Eight . This stunning retrospective catalogs each of Quentin Tarantino’s movies in detail, from My Best Friend’s Birthday to The Hateful Eight. The book is a tribute to a unique directing and writing talent, celebrating an uncompromising, passionate director’s enthralling career at the heart of cult filmmaking.

About the Author
Tom Shone was the film critic for the Sunday Times from 1994 until he moved to New York in 1999. He is the author of four books: Blockbuster: How Hollywood Learned to Stop Worrying and Love the Summer, In the Rooms, Martin Scorsese: A Retrospective, and Woody Allen: A Retrospective. His writing has appeared in the New Yorker, the New York Times, the TLS, Intelligent Life, Areté, and Vogue. He currently teaches film history and criticism at New York University and is the film critic for the Daily Beast.

About Insight Editions
Insight Editions celebrates cultural milestones in film and television, gaming, music, art, comics, and sports through immersive and imaginatively designed books, collectibles, journals, scrapbooks, and other innovative offerings. By combining the highest quality production values with the time-honored traditions of publishing rich subject matter, Insight Editions is committed to creating unique products that offer readers engaging new ways to experience their favorite films, games, or artists. Beautifully designed and informative, products from Insight allow fans to learn and use their imagination to create and expand beyond familiar worlds.