Vai Academy is an event for players and music-lovers of all ages, levels, interests, and taste! Whether you are a master player, a beginner, or just an enthusiastic fan. Our four-day programs offer activities and workshops for you. Our environments are non-competitive and are strictly about immersing oneself in the joys of music and our lovely surroundings! 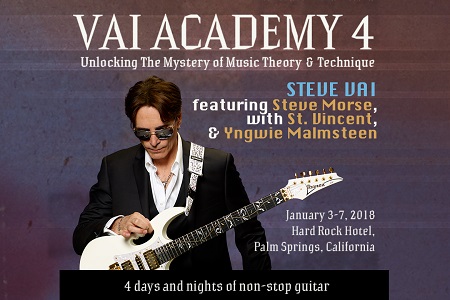 AN INVITATION FROM STEVE VAI

“Allow me to excitedly introduce the fourth year of Vai Academy!

“Since 2014, this camp has been something that I continue to look forward to, and it grows and expands every time we do it. Since our first Academy camp, I’ve met a lot of incredible guitar players and made some close new friends along the way.

“In 2018, we’re going to take over the Hard Rock Hotel in Palm Springs, CA, January 3-7. Our focus is also evolving. Of course, there are going to be some amazing instructors, classes, and a lot of jamming, but I wanted to do something a little different. For starters, I’m planning on giving more classes in 2018 than I’ve done in the past.

“In this year’s camp, we’re aiming to demystify music theory. We’re going to present the basics in a way that can be easily understood. Moreover, these methods will be accessible on the instrument in order to expand every player’s uniquely creative potential. I’m expecting to see a lot of “Aha” moments in many of the campers.

“None of the last camps have discussed this particular topic by me and how to apply it. Over the years, I’ve noticed that many new (and even seasoned) musicians can be confused about the importance of knowing or even understanding music theory. I wanted to do something about that!

“The idea for the focus on music theory in this camp was inspired by questions that I often get asked while doing EVO experiences, Alien Guitar Secrets Masterclasses, reading your reviews of previous camps, and music magazine-related interviews. Music Theory can be a major source of concern and even anxiety in the minds of many musicians. We’re going to debunk the myths and show you how to apply theory creatively. Music theory is basically teachable on an intellectual level, but can be very helpful when going deeper than the theory in your songwriting and improvising. You don’t have to get hung up on it.

“Technique is also going to be a big part of 2018. Previously, I’ve somewhat spoken about technique in regards to tone, vibrato, intonation, bending notes, picking, hammering, etc. However, this camp will focus on technique as applied to music theory. Beyond these central themes, I plan on creating classes about everything from chord theory and interval relationships to time signature theory.

“You can expect many of the very cool elements that have become traditions in previous years. We have a host of excellent teachers and special guests like Steve Morse (a big influence of mine!) and St. Vincent (an innovator I’m floored by!) who will be spinning their miracles. We have constant jams going on in various room, and of course, I plan on jamming with every camper that would like to jam with me and my band. That’s perhaps the thing that I enjoy the most. Every person creates a little surprise and delight.

“In the end, Vai Academy is all about sharing. We’re all in this together as musicians. I love that we all experience living life to its fullest by enjoying every moment alongside one another.

“Get ready for an incredible Vai Academy in 2018!”