Steve Martin and the Steep Canyon Rangers will be on the Today Show on September 28th @ 7AM EST on NBC (UPDATED: embedded below), before heading over to the Late Show with Stephen Colbert, which airs at 10:35 CST on CBS.

UPDATED: Watch Steve Martin and the Steep Canyon Rangers perform “Caroline” on the Late Show with Stephen Colbert via the embedded clip above.

Steve Martin and the Steep Canyon Rangers will be promoting their brand new bluegrass release, The Long-Awaited Album, which was released on September 22, 2017 via Rounder Records. To read more about the album, visit our previous post. 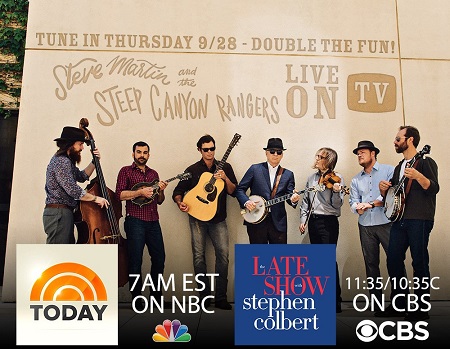 If you want to learn banjo, guitar or mandolin, here’s where you can go: https://t.co/zgr6QOSsVJ I’m a modest financial supporter.