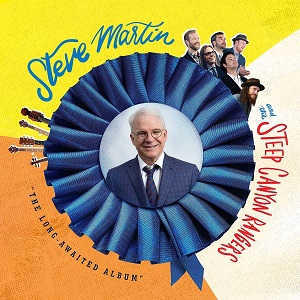 “Santa Fe,” a brand new song from actor/comedian/musician Steve Martin, can be streamed below. The new track is taken from the funnyman’s upcoming bluegrass release, The Long-Awaited Album, which pairs Martin with North Carolina Grammy-winning group the Steep Canyon Rangers.

Produced by Peter Asher (Robin Williams, Morrissey, Neil Diamond, Cher), The Long-Awaited Album features 14 new songs and will be available on September 22, 2017 via Rounder Records. The project is “full of stories that mix humor and melancholy, whimsy and realism, rich characters and concrete details. And lots of banjos.”

For those of you who may not know, Martin is an unbelievable banjo player and award-winning musician who has won the International Bluegrass Music Association’s Entertainer of the Year trophy and won a Grammy for Best American Roots Song for “Love Has Come for You,” the title track of his collaborative album with singer Edie Brickell.