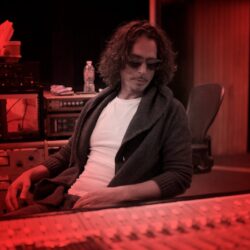 Chris Cornell (Official): 28 years ago, on March 8th 1994 the album “Superunknown” was released. To this day Superunknown is considered one of the most iconic and influential records of its time that included what would become the band’s biggest hit and a rock anthem, Black Hole Sun, introducing SG to mainstream success.
It included other hits like Spoonman and Fell On Black Days.

In different interviews, Michael Beinhorn, the producer of Superunknown, described the making of the album where he explained to Chris who was nervous about what this album was going to be –

“THEY’RE LISTENING TO YOU
BECAUSE OF WHAT YOU’RE GIVING
THEM… WHAT THEY’RE GETTING OUT
OF YOUR MUSIC, NOT BECAUSE
YOU’RE GIVING THEM WHAT THEY
EXPECT,'” BEINHORN RECALLED
SAYING. “THEY’RE ALONG FOR THE
RIDE WITH YOU. THEY’RE
FOLLOWING. DO SOMETHING THAT’S
AMAZING AND THEY’LL FOLLOW.”

Beinhorn further explained-
“YOU AND YOUR BAND ARE
SOUNDGARDEN….YOU PLAY THE SONG,
IT WILL SOUND LIKE SOUNDGARDEN
BECAUSE YOU’RE PLAYING IT.”

Without question, Kim is one of the most talented guitar players. Interesting though was that Chris played most of the guitar on this record. Beinhorn shared; “Kim actually didn’t play much guitar on Superunknown- apart from leads, it was mainly Chris. Chris’s time and feel was better, as was his tone.”

In 1995, the album was nominated for the Grammy Award for Best Rock Album.
Both Black Hole Sun & Spoonman each won a Grammy Award for best hard rock and best metal performance, respectively.