Slash On 1st Guns N’ Roses Rehearsal, “It Was Intense” 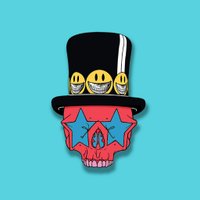 How close to drinking and drugging yourself to death did you really come?

“I had enough of those experiences where most people would go, ‘Okay, I’m done with this,’ but it didn’t put any fear into me whatsoever. I kept doing whatever it was I was doing. So all things considered, I managed to function and keep going. It didn’t really become an issue until 2005. There was a period in 2001 when I was really sick from alcohol poisoning and that slowed me down for a minute, and then it started back up again. 2004 and 2005 was pretty bad and finally, in 2006, I was like, ‘You know what? This isn’t fun any more. You can’t recreate that initial fucking buzz you had back in 1980-something, it’s never going to get that good again.’ And I slowly and surely got out, but it was really hard to get out from underneath all that dependency.”

Did anyone ever offer any helpful advice during that heavy time?

“David Bowie, once, when I was going through my serious hallucination phase. I talked to him about it because it was disturbing. Was this when I was seriously drinking? This was more drug-related. And he’d said, ‘No, you’re probably in a bad place right now and you have become vulnerable to a lot of outside interaction with things that people don’t normally see, and you’ve exposed yourself to this.’ And I was like, ‘Woah! That’s heavy…’ But that was a sound piece of advice. Or maybe an eye-opening clarification of the state of mind I was in.”

On meeting Lemmy Kilmister for the first time:

“My first real Lemmy experience actually happened at The Rainbow. This was probably pre-Guns N’ Roses and I was there with a girlfriend. We’re sitting in this booth, and I’m not anybody, right? So I get up to take a piss and when I come back, Lemmy’s there. He’s on the outside seat, she’s on the inside, and I get on her other side. I’m so enamored that Lemmy is there that I’m completely oblivious to the fact that he’s chatting up my girlfriend. And she’s in this weird state, thinking, ‘Who the fuck is this guy? And why aren’t you doing something about it?’ Lemmy finally realizes that he’s become the third wheel in this situation and it’s not going anywhere for him, so he gets up. She was like, ‘Hey, I didn’t do anything…’ And I said, ‘Do you know who that was?’”

Can you remember how you felt when you first heard Axl Rose singing?

“The first time was on a cassette that Izzy [Stradlin, co-founding Guns N’ Roses guitarist] brought over to my house. There was all this noise and then there’s this really intense high voice over the top of it. My first impression was that it was very soulful. It had a bluesy, melodic thing to it, which was rare for that type of voice. You didn’t often hear somebody hold that melody together so naturally. Then I went to see him and Izzy play one time. I didn’t actually realize I was going to see the same person that was on that cassette. They were fucking hardcore on stage. Izzy was doing knee slides and Axl was bashing down. It was cool, like, ’Fuck…’”

What was the energy like when you first got in a rehearsal room together?

“The first time that we jammed together was at a rehearsal place in Hollywood and it was intense. We started working together at that point, we did some shows and it was always very unpredictable and wild. Like, ‘Okay, let’s see what happens.’ It was pretty surreal being back on this [reunion] tour because the first time that Axl, Duff [McKagan, Guns N’ Roses bassist] and I were back in the same room in person, there was this unquestionable, powerful chemistry that I hadn’t really thought about because it had been 20 years. I always knew that we had this thing. It just happened as soon as we plugged in and started playing, and it was really like an overwhelming feeling of, ‘Oh yeah…’”

How did you end up working with Michael Jackson on the Dangerous album in 1991?

“Initially, it was a phone call from my manager where he said, ‘Michael is trying to get in touch with you,’ and I was like, ‘Wow.’ So I called him back and he wanted me to play on Dangerous. We made a date and I went down to the Record Plant in Hollywood and he was there with [actor] Brooke Shields. That was very surreal. These were two people that I’d sort of grown up with, in a way. So we hung out for two minutes and they went off to dinner and left me with this song. I did my thing, he really dug it and afterwards he kept asking me if I’d be into doing this, or doing that. I’d do some shows here and there and it was fun because he was such a pro, and he was such a fucking talent from on high. That was the main thing: he was so amazingly musically fluid. Such a treat to be around.”

What was it like to hang out with him?

“Onstage, his whole professional thing was really where he clicked. When he wasn’t working, or in production or whatever, it was then you could see that he was sort of at the mercy of his own success. All the people he had around him, the tugging, and the yes people, you could tell that he knew 90 per cent of them were full of shit. I felt sorry for him in that sense. I did a couple of shows with Michael in Tokyo and saw how this whole massive fucking thing worked, and he was the center of it. The only time I really felt like he was in any kind of comfort zone was when he was actually onstage. Right after that, Guns came to town and did our shows and our success was massive, but it wasn’t as overwhelming as what Michael was going through. It was just an interesting light, looking at the two things and being careful about what you wished for.”

Did you want to be in a rock’n’roll band from the start?

“I was a big fan of music from as far back as I can remember. I used to love going to gigs and seeing bands and I was totally mesmerized by it all, but it never clicked with me to go and do that myself until I picked up a guitar because [former Guns N’ Roses drummer and childhood friend] Steven Adler had one. I thought, ‘Well, he knows how to play guitar, so I should play bass to start a band.’ Then I found out from a local music school that it wasn’t the bass I wanted to do at all, it was lead guitar. All of a sudden that set me off in this direction. But the thing that excited me musically at that time? When you’re a teenager, regardless of how cool the music is that your parents are listening to, you start to discover your own. Aerosmith’s [1976 album] Rocks was the pivotal influence for me back then. The band’s attitude and that sloppy, hard rock thing made me go, ‘Woah!’ Every musician has their ‘Woah!’ artist or record that blew their mind. That was mine.”

According to Slash, @gunsnroses were “like that gang that walked into a room like, ‘You don’t want to fuck with us.'”https://t.co/fbYB7UXe7e pic.twitter.com/87UGBUf4D4