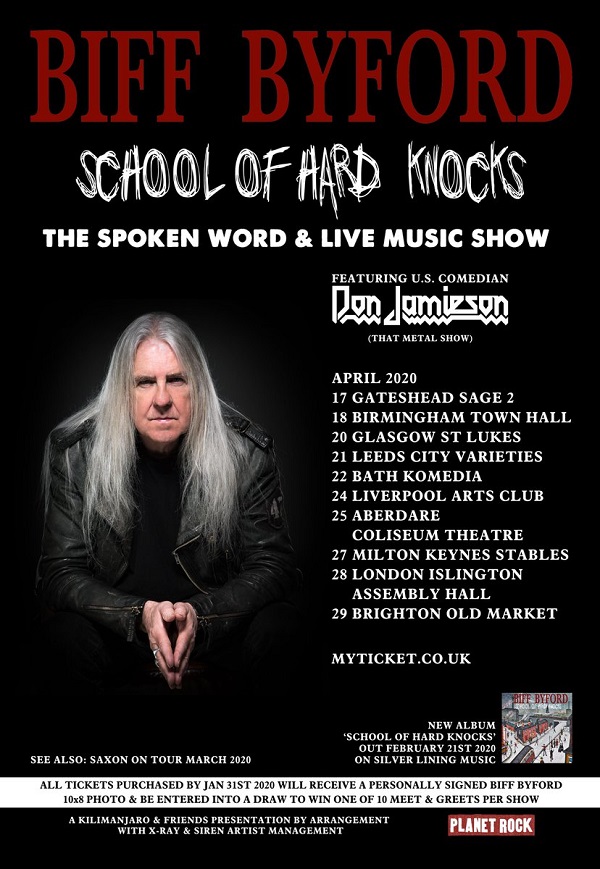 Biff Byford is pleased to announce his first ever solo tour dates in April 2020. Starting in the UK, the tour will continue into various European territories (dates to be announced) later on.

The UK dates are as follows:

The show will take an “evening with” format and will be split into two halves. The first half will feature a spoken word show compared by American Comedian and star of VH1 Classic’s “That Metal Show” DON JAMIESON, where Don will quiz Biff on all aspects of his life and career. The second half will consist of a live show with Biff and his band.

Biff continues “The show will consist of some old songs, some new songs, some cover versions and some songs off the solo album. It’s going to be great and I am really looking forward to it. It’s going to something a little bit different, but it will be very cool, so I’ll see you all there!”

Tickets are available from Friday December 5th at 10am from myticket.co.uk and all usual outlets. The Leeds and Aberdare dates only will be onsale from 10am on December 13th.
As a special bonus, fans who buy their tickets prior to January 31st 2020, will receive a personally signed 10×8 Photo together with entry into a draw to win one of 10 VIP meet and greets per show.

The Album’s first single “Welcome To The Show” was launched back in October and the second single, the title track “School of Hard Knocks” is out December 13th.