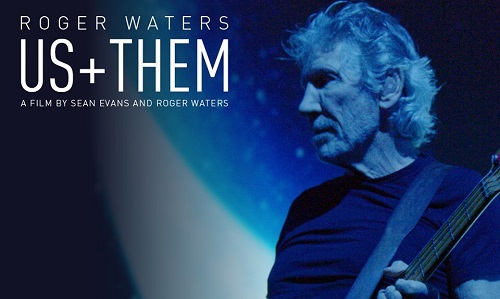 Rolling Stone recently interviewed Roger Waters about his new concert film, ‘Us + Them.’  An excerpt from the interview has been posted below.

There’s a lot of Trump imagery in the film (Us + Them). Did you ever get sick of seeing house-sized pictures of him on the tour?

Roger Waters:  I didn’t look at it very much. I’m glad it’s on the film. I like the zoom-in on the [doctored photo of Trump’s] tiny dick. I think that’s important to point that out because he clearly is infantile and he almost certainly has got a tiny dick. Anyway, whatever, it’s silly to waste breath on Trump. Or it would be if it wasn’t for the fact he’s conspiring to destroy the United States brick by brick.

The dick image is shown during “Pigs (Three Different Ones).” What did that song mean to you when you wrote it and what does it mean to you now?

Roger Waters:  Well, within the context of this show, it’s “Pigs (One).” It’s just the pig, the awful Trump.

But in the original thing, who were they? I don’t know. “Big man, pig man,” that’s any businessman who’s more interested in making money than they are in having relationships with other human beings, which might be more rewarding than accumulating wealth. So that’s for Steve Schwarzman and all the rest of them. They’re all the same, by and large.

The last verse is about somebody who tried to censor English television to keep sex off of it who was called Mary Whitehouse, which was convenient ’cause it means I can say, “Hey, Whitehouse,” and a lot of people think I’m singing about the White House in Washington, D.C. And I am now, because nobody cares about Mary Whitehouse anymore. She did try to clean up British television by making it sort of evangelical-Christian–friendly in ways that are unhealthy, in my view. So hang on, what’s the second verse about?

Another standout in the film is “Wish You Were Here.” What does that mean to you now?

Roger Waters:  The last time I sang “Wish You Were Here” was on Balsham Street, outside the Home Office in London. Julian Assange is locked up in Belmarsh Prison, and I heard he’s not doing well. You will not know this because it wasn’t reported in a single mainstream media outlet; not a single newspaper or television station reported the fact that I made a public performance of that song for Julian Assange. People ask me all the time, “Why aren’t journalists standing up for Julian Assange? He’s a journalist doing his job.” The answer is, they’re frightened of being fired. But as for why I played “Wish You Were Here,” it just popped into my head. It’s easy to sing with one bloke and an acoustic guitar. I’m really proud of that song.

There’s a close-up in the film of you at the start of “Time” where you’re playing a tick-tock sound on your bass strings. Is that how that song started, making that sound?

Roger Waters:  No, the tick-tock thing came about probably from just the idea of, “Hey, let’s use clock sounds,” so they’re just deadened strings on repeat. But the impetus was the narrative in the song. For me, personally it’s a very important song. I wrote that when I was 29 years old, so the bits in the song where it goes, “No one told you when to run/You missed the starting gun,” it’s about my experience of being 29 years old and certainly going, “Fuck me. It’s the middle of life. I’ve been told that I was preparing for something.” Eventually I figured out what it was, and it was probably something to do with earning a living and having a family and blah, blah, blah.

But suddenly I realized that I was aimless. The reason it’s a good song is because it describes the predicament of anybody who, growing up — if we’re grown up at all — suddenly realizes that time is going really, really fast. It makes you start to philosophize about life and what is important and how to derive joy from that. And whether we should let the pigs and dogs spend all our energy trying to fuck other people and steal from them or whether we accept the truth of this fact: If you help another human being, it brings joy to your life. And the act collectively brings more joy to your life than to act selfishly. It’s as simple as that.

I’m sure you were happy to hear that when David Gilmour sold his guitars this year, he donated the money to fighting climate change.

Roger Waters:  Oh, bless him. I think that’s a good thing. Good for him. [Pauses] I wish he’d let me advertise this movie on the Pink Floyd website. It’s not allowed. He censored it, and I’m not allowed to announce anything on it.

When was the last time you spoke to him?

Roger Waters:  We spoke in June. We had a big meeting where I came up with a big peace plan that has come to nothing, sadly.

I’m sorry to hear that.

Roger Waters:  I know you are. I bet all Pink Floyd fans are sorry to hear that. They all hoped that we could kiss and make up and everything would be wonderful in a cozy, wonderful world. Well, it wouldn’t be all that cozy or wonderful for me, because I left Pink Floyd in 1985 for a reason. The reason being that I wanted to get on with my work.

Well, thank goodness I’ve been able to get on with my work. Work is its own reward. I was very happy to see in the Variety review of the movie that they managed to connect the dots between Dark Side of the Moon, Animals, [Waters’ solo album] Amused to Death, and Is This the Life We Really Want? That was gratifying. Anyway, let’s not go there any further. I’ve said more than I should.