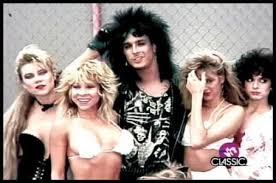 Former Motley Crue bassist Nikki Sixx recently spoke to Rolling Stone about the upcoming Girls, Girls, Girls reissue and about how life as a retired rock star is going. “I have a star tattooed on my face and more money than I could ever spend in my life,” he says. “So I’m fuckin’ happy as fuck to be in retirement.”

A few excerpts from the interview can be found below.

What strikes you about Girls, Girls, Girls when you listen to it now?
It’s an album with some real grit to it. I think it represents where we were at the time, as a young bunch of men that were extremely successful and didn’t necessarily have all the tools to deal with it. The lyrics are very raw. “Wild Side,” “Girls, Girls, Girls” and “Five Years Dead” are great examples where I feel like I really nailed it. And “You’re All I Need” is a great storytelling song that isn’t as glossy and pretty as some of the other bands were trying to come off as. Of course, you don’t know this until you step back.

How did the song “Girls, Girls, Girls” come together in the first place?
Well, it’s what we were doing. We were riding motorcycles and hanging out in strip clubs. We were off the road. We were young guys having fun, man. Tommy had the notes for the chorus, and I wrote this lyric like, “Friday night, and I need a fight” – kind of an AC/DC thing – and I thought it was pretty cool. Mick wasn’t happy with the riff. As we were leaving rehearsal, he goes, “I’m not feeling good. I’m going to go home, get an eight-ball of cocaine and a bottle of Jack Daniel’s, and I’m gonna come back tomorrow with a better riff.” And he came back with the riff you hear, and it was like, “Whoa.” So that’s when we nicknamed him “Eight Ball” Mars. All we had to do was hand Vince the lyrics and point him in the right direction, and that Gatling gun, spitfire voice of his would put the stamp on it.

Did the song change your groupie situation? I imagine that’s why you wrote it.
Well, Mötley Crüe was like Caligula. I don’t know why but no one ever told us no. Well, I guess I do – because if you told us no we would do it anyway.

We just came up with crazy shit [for groupies]. We had a hotel room that we would book under the name Justin Case, and that would be a master suite that would be on the same floor as the band, and we would keep the girls in the Justin Case room. You didn’t want the girls in your hotel room because they’d steal your money, jewelry and wallet. If anybody needed us, they’d call the hotel and ask for Justin Case, and that’s where the party would be.

Before the girls got to the Justin Case room, though, we had a pretty good way of tagging them in the audience, and they would be brought back to the hospitality room at the venue. Then we would walk in and say, “OK, you, you, you, not you, you, you,” and go back to the Justin Case room. Well, the “hospitality room” turned into the “hostility room,” because the girls would get so mad at us. And we were so young; we didn’t know why they were mad. But it was because we were treating them like cattle.