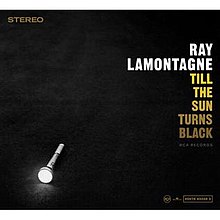 Released on August 29, 2006, Till The Sun Turns Black is the second full-length release from Ray LaMontagne. It was produced by Ethan Johns (Ryan Adams, Kings of Leon, Paul McCartney) and recorded at Allaire Studios in Shokan, New York. The album was a top 40 record and sold over 28,000 copies in its first week.

“I thought this album, “till the sun turns black”, was a stellar follow up to his first, without trying to sound the same. I’d seen him play at a smaller theatre, Town Hall, in NYC a few years before, and what struck me was how uncomfortable he seemed to be with the attention he was getting. At one point during the show he was taking so much time to tune his guitar and there was a very long pause in the action. It was broken by a fan breaking the silence by shouting “I LOVE YOU RAY!” His response – “Shutup Fratboy” in a deadpan delivery. The crowd erupted in laughter. There was something charming about it in some odd way. This song seems to be some sort of confessional into his mind – feeling emptiness when the outside world seems to be congratulating you on your success. -Wes”