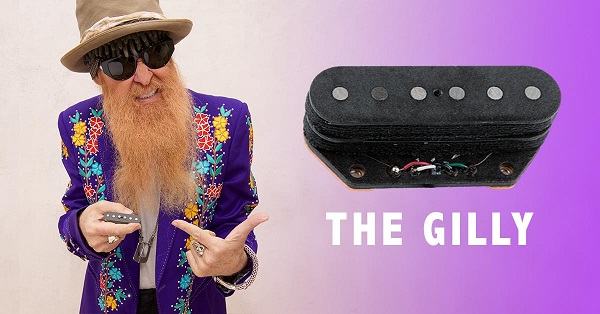 Behind every good man is an even better wound pickup. Introducing the Gilly—inspired by Billy Gibbon’s tele tone and the woman that keeps him inspired, his wife Gilly.

Designed to capture the magic of Billy Gibbons’ legendary Tele tone, but with a fuller and smoother voice.

If you made a Mt. Rushmore of guitar tone, you’d have to carve into it the bearded face of Mr. Billy F. Gibbons. And if you want to grab a piece of Billy’s legendary Tele tone, you’ve got a cool new way to do it. The Gilly has everything that a great Telecaster pickup should have, with a couple of interesting twists. Thanks to its custom wind and the use of Alnico V magnets, the Gilly speaks with a rounder, smoother voice, while retaining all the snap and pop of the original. The Gilly’s stack design delivers all that tone without the hum, making it as comfortable with high-gain rock tones as it is with bluesy spank and shimmery cleans.

The Gilly pays tribute to the great women who inspire Billy. It’s named for his wife and it’s wound by the Duncan Custom Shop’s MJ—La Maestra, Maricela Juarez.

All the goodness of the classic Billy Gibbons Tele tone, with a new wind and Alnico V magnets for a fuller, smoother sound.
The stack design ensures noise-free operation, even at Texas-sized gain levels.
The Gilly is a tribute to the women who inspire Billy—named for his wife and wound by MJ.
The Gilly is made in Santa Barbara, California.