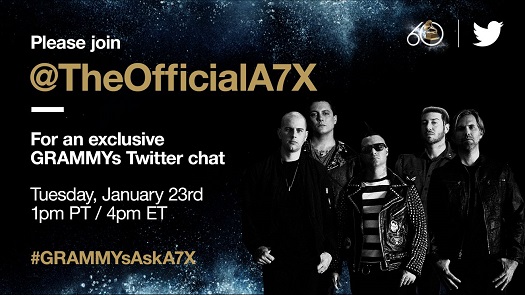 Avenged Sevenfold have a GRAMMYs Twitter chat set for tomorrow (Tuesday, 1/23) at 1PM PT.  Start submitting your questions now using #GRAMMYsAskA7X and join the conversation. The Twitter chat is at this location.

The group released their seventh studio album, The Stage, on October 28, 2016 via Capitol Records.  With almost no promotion beforehand, the album still landed at #4 in the United States on the Billboard 200 with 76,000 equivalent units sold, 72,000 of which were traditional album sales.