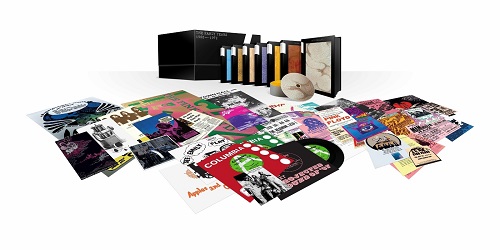 On 24 March 2017, Pink Floyd will release ‘The Early Years, 1965-1972: The Individual Volumes’, a series of book-bound individual collections of the band’s seminal music during those years. The six individual collections were first released as part of ‘The Early Years 1965-1972’ box set, but will now be available as bite-sized volumes broken down by years 1965-1967, 1968, 1969, 1970, 1971 and finally 1972. Outtakes and demos from the band’s early albums are included alongside live versions, as well as radio sessions and television appearances, on these packages.

The titles of each package (CAMBRIDGE ST/ATION, GERMIN/ATION, DRAMATIS/ATION, DEVI/ATION, REVERBER/ATION, OBFUSC/ATION) were dreamt up by Roger Waters to give an insight into where the band were at that particular point in their career.

‘The Early Years: Individual Volumes’ give fans the opportunity to hear the evolution of the band and witness their part in the cultural revolution from their earliest recordings and studio sessions to the years prior to the release of ‘The Dark Side Of The Moon’.

For fans wishing to immerse themselves in the full Pink Floyd story, the complete box set ‘The Early Years: 1965-1972’ is still available, and collates all of the individual volumes plus extra discs, collectables and memorabilia exclusive to the box set. In addition to the individual volumes and the deluxe set, a 2-CD highlights album ‘The Early Years – CRE/ATION’ is also available.

More info at this location.