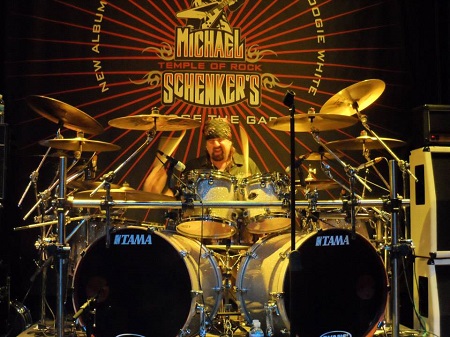 Black ‘n Blue drummer Pete Holmes was recently interviewed on our Full in Bloom Podcast.  During the interview, Holmes talked about working with the legendary Michael Schenker.  The segment has been transcribed below.
_________________

Michael Schenker is a German rock guitarist best known for his tenure in UFO, along with a long career performing with his solo band. He first rose to prominence as a founding member, along with his brother Rudolph, of the hugely successful band, The Scorpions. He then founded the band UFO in the mid 70s before going on to lead the Michael Schenker Group in a number of different incarnations. Schenker is considered by many a legendary figure in the history of heavy metal guitar. read more

full in bloom:  I’ve got to ask you about Michael Schenker.  It sounds like you worked with him quite a bit.

Pete Holmes:  Absolutely.  I think I probably played with him longer than any other drummer.

full in bloom:  Is there any reason you’re not touring with him now?

Pete:  He likes to change things up.  He really likes to change players and do different things.  Maybe that’s his idea of always evolving.  But that’s the only reason.  I got a call from his management last year, asking me to come out  and do some shows.  Before we could agree on everything….they didn’t happen.  There were some things that were supposed to happen and they wanted me to do them and they just never came to fruition. But that’s the only reason.  He’ll do one thing and he’ll just change players.  It’s kind of a weird thing.  He likes to do that.  He has different guys for different projects.

full in bloom:  How long have you worked with him?

full in bloom:  He looks like he’s got his shit together now.

Pete:  He is doing really good.  I think for the past 5 (years)…maybe longer than that, he’s been sober and clean.  Fuck, he really has got his shit together.  His playing is unreal.   The people love him.  The crowds love him.

full in bloom:  I found an older interview where Rev Jones was talking about how Michael abandoned you guys on some tour.

Pete:  What Rev was talking about was when he (Michael) was drinking heavy and doing drugs.  He’s a fuck up when he drinks and he knows it.  So he’s just not doing it.  He’s doing better.   I’ve done some shows with that guy that have just been…some of the biggest shows of my life I played with that guy.

Pete:  He’s massive in Europe, but he’s big here, too.

full in bloom:  I know he’s a god amongst men, but I sometimes think he’s a bit under appreciated here.

Pete:  Yeah, I mean people don’t know that he’s the influence for people like Eddie Van Halen.  But I think the older crowds that knew UFO, they really know the deal.  When we go to Chicago and play the House of Blues there.  Shit, we could sell that out a week straight.  It’s unbelievable, his history there.  It really is like that across the U.S., I mean I can’t think of any place we haven’t played that it hasn’t been sold out.  If it hasn’t, it’s been due to weather or something like that.  But yeah, in Europe of course,  we opened for the Scorpions so we were playing in front of 80,000 people.  That’s on video of me playing that show.  There’s also a DVD out from the Michael Schenker Group called  Worldwide Live  2004.  That’s us playing some huge arena (@Metalmania Festival 2004).  I learned a hell of a lot doing that gig.  You think you know it all and then BAM, you’re playing with Michael Schenker and you’re getting schooled again.

full in bloom:  What’s he like to be around?

Pete:  Michael’s personality is really kind of delicate.  His people skills, years ago, he was lacking people skills, because all  he’s done his whole life is play guitar.  He locked himself in a room for years and years and years, so the story goes.  You know, he comes out at 16 and joins the Scorpions.  He wrestled with that.  When he’s drinking, he’s somebody you don’t want to be around at all, because he fucking hated you.  He just hated everything.

full in bloom:  So you just stay out of his way?

Pete:  Yeah, absolutely.  It’s ugly, you know?  He’s not going to be real personable with a lot of the fans coming up.  He doesn’t know how to interact.  He does more now, for sure.  He’s an incredibly nice guy.  He’s a great guy.  I have a different relationship that’s different than what normal people would have.  People meeting him, ‘Well, he’s kind of an asshole’ … ‘Well, that’s because you haven’t sat and talked to him.  You haven’t sat down with him while he’s laughing.  You haven’t sat down with him while he’s crying.  You don’t know his whole story.’  It’s really un-fucking-believable .  When we were playing in San Francisco a couple of years ago and we got (James) Hetfield and Kirk Hammett.  They’re backstage with us before the show, during the show and after the show and they just cannot be away from him (Michael).  They’ve got to be like 3 feet away from the guy.  And he doesn’t even realize it, he’s not thinking that.  He’s just having a conversation and doing his thing.  Anytime he comes into the room they just have to clamor  up next to him.  It’s amazing.  So when you see that kind of influence……But he’s definitely one of a kind;  there’s nobody like the guy, you know?  He’ll tell you what he thinks and he won’t mix words.   He’s German, so he has no sense of sarcasm or humor. (laughs)  But he’s a really sweet guy;  he’s a really nice guy.  He’s always treated me respectfully…sure, he’s yelled at me before, but I don’t take any of that kind of stuff personally.  I’m the guy that he calls when he needs something.  He’s told me that I’m his favorite drummer before, at a time when I could believe him.  It’s all good.  When you get a legend like that, that I get to learn from and I get to talk to, it’s amazing, you know?  That’s what I mean when I say the real deal.  That’s definitely the real deal, right there.

Listen to the entire interview on the Full in Bloom Podcast at this location. 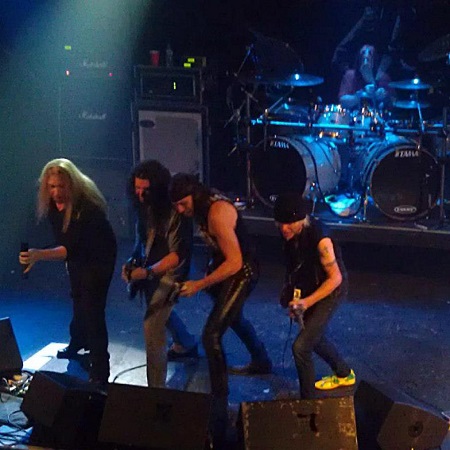