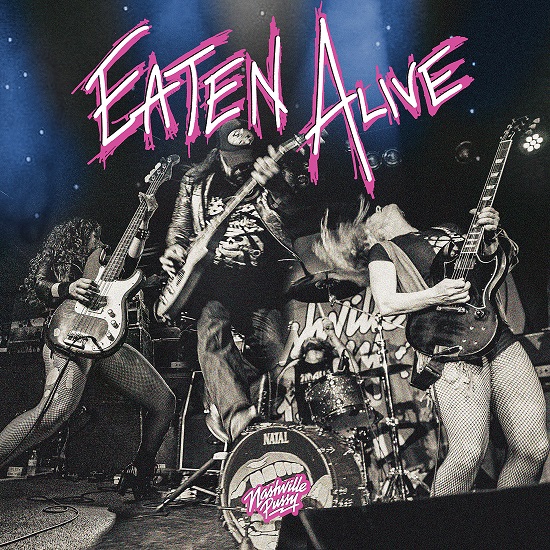 Coming hot off of their critically acclaimed 7th studio album, “Pleased To Eat You”, the Grammy-nominated Nashville Pussy returns with “Eaten Alive”, a ferocious hell ride of a live double LP that is proof positive that the band is one of the best live acts ever.

Recorded in the UK, this is Nashville Pussyy’s “Live at Leeds” and one of most unrelenting concert albums since Motorhead’s “No Sleep Til Hammersmith”.

“This is the album that our fans have drunkenly demanded for years”, says singer Blaine Cartwright.

“‘Make an album that sounds like you guys do live!’, I’ve heard that phrase slurred in my face in accents from all over the world,” jokes Blaine.

“So here it is you, drunken bastards!” 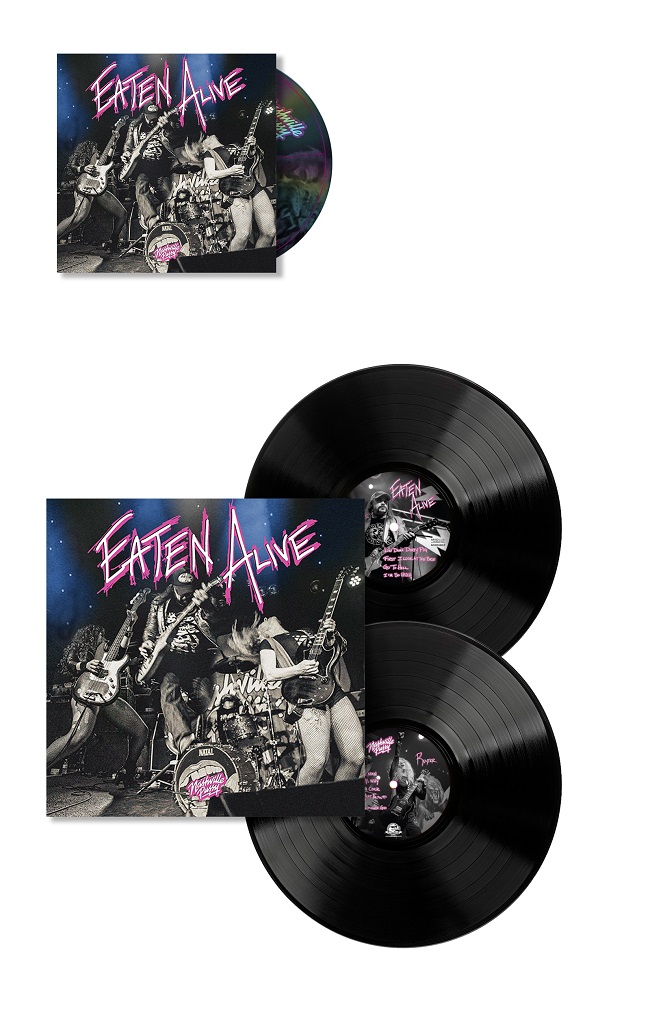 The mesmerizing leads of legendary guitarist Ruyter Suys leap off the grooves and grab the listener by the throat. Ruyter has been hailed with accolades since the band’s inception including being named “one of the top female performers of all time” by That Metal Show. And that’s just one example.

Combine that with the irresistible thunderous rhythm section of bassist Bonnie Buitrago and hard-hitting drummer Ben Thomas, and it makes for one of the most satisfying rock experiences ever recorded.

Blaine describes the new single, “Pillbilly Blues,” as “A scorching Southern rocker co-written with Eddie Spaghetti of Supersuckers fame, this should be the new Kentucky State Anthem. It’s the story of the modern pill peddlers hustling their way through the Appalachian Mountains looking for an extra buck. The lyrics say it all: ‘My Grandaddy made moonshine, My Daddy grew some weed, But neither one of them pay enough, When you got six kids to feed.’ It’s a modern Southern saga. And this blazing live version comes at you at a million miles an hour. Amen and pass the chicken! And the pills…”

“Eaten Alive” not only serves as a perfect souvenir for hundreds of thousands of lucky rock n’ rollers that have seen Nashville Pussy in the 40-plus countries over the past 25 years, but it’s also an excellent starting point for all those unfortunately yet to have been exposed to the fiery baptism of hard rock that the band delivers on a nightly basis.

Nashville Pussy is ravenously looking forward to their upcoming (twice postponed) tour of Europe. It all starts with Sweden Rock with Blue Oyster Cult and ends at Barcelona Rocks with Judas Priest two months later. In between, the band will be eating fans alive all across Europe.

Kicked In The Teeth
Piece Of Ass
Wrong Side Of A Gun
Pillbilly Blues
We Want A War
Rub It To Death
Go Home And Die
She Keeps Me Coming, And I Keep Going Back
CCKMP
5 Minutes To Live
Low Down Dirty Pig
First I Look At The Purse
Go To Hell
I’m So High
I’m The Man
Why Why Why
Strutting Cock
Til The Meat Falls Off The Bone
Go Motherfucker Go