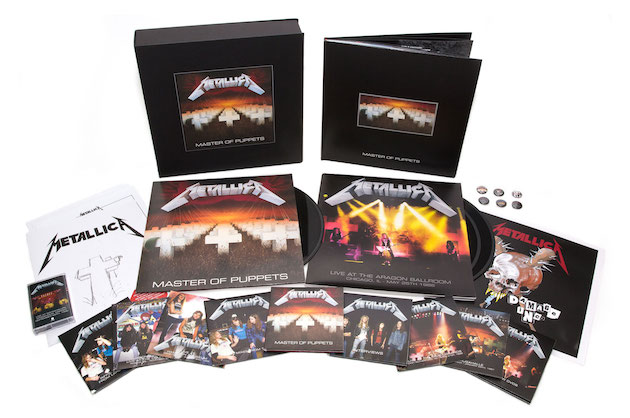 What do you remember about how the lyrics came together for the album?

Ulrich: At the time, James would go off into his own world and handwrite them, and the lyrics would come from talking about different things. “The Thing That Should Not Be” has its origins in the H.P. Lovecraft mythology; “Disposable Heroes” came out of talking about just being just a tool in somebody else’s war; “Leper Messiah” I think, was something Kirk suggested that came on with a David Bowie song, and at that time obviously the Jimmy Swaggarts and the Jerry Falwells and all those dudes that were on TV all the time. And we’d sit around and watch TV a lot, and there was a lot of stuff on TV that would trigger lyric ideas, and just sitting around and watching those evangelists do their whole thing, you know, “Send me money and I’ll heal you,” and all that type of stuff. Obviously they had an effect on us at the time [with “Leper Messiah”]. “Damage, Inc.” and “Battery,” were just about the family of fans and that sense of belonging to something greater than yourself. “Master of Puppets” was obviously about the addiction and all that stuff, and it was somewhat inspired by our friend, Rich Birch – who was the one quoted on the back of Kill ‘Em All, “Bang that head that doesn’t bang” – he used to crash on the couch of James’ and I’s house and he would wake up and chop his breakfast on a mirror and then get going. Listen, we loved the guy to death, and he was a good friend of ours, so it wasn’t a judgment, but it was just about how people rolled at the time.

There isn’t anything in the box set from Cliff’s (Burton) tapes. How did he present songs to the band?

Hammett: He played the intro to “Damage Inc.,” with the volume swells, and then he played me the tune that was the inspiration for that, which is a Bach piece. And he said, “Does it sound alike?” and I said, “No way, man. You’re totally in the clear. It sounds completely like your own thing.” And he wrote the whole middle bit in “Orion” on bass and then worked out the harmony parts on guitar but played them on bass. On the record, James and I were playing all this harmony and initially Cliff wanted to do all of those harmonies on bass. It wouldn’t have worked because it would have been more of a solo sort of thing, like the thing in “Damage Inc.” So we integrated it into “Orion” and came up with the guitar-bass arrangement that’s on the album. That was his swan song, really.

There are a lot of cool concert recordings in here. What do you remember most about these shows?

Hammett: I remember the Meadowlands show being particularly good because the night before, James, Cliff and I were hanging out with the Samhain guys. It was really cool to be hanging out with them, and I remember Eerie [Von] and Glenn [Danzig] being at the show and us being excited about that fact and being really inspired and wanting to play a really good show because fucking Glenn from the Misfits and the Samhain guys were there. Like, “We gotta put on a good show.” That’s what inspired my playing.