Record Store Day Purchases – Saxon ‘Into the Labyrinth, Venom ‘At War with Satan’ 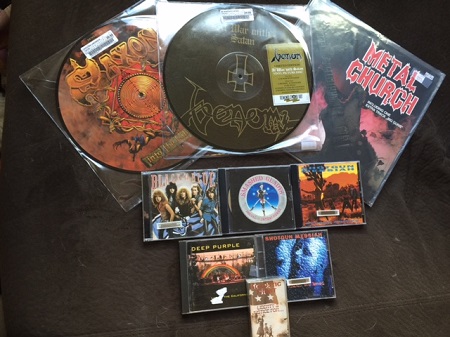 Record Store Day purchases from Colorado’s finest record store chain, Independent Records. I had a few items in mind, but by the time I arrived, they had already sold out of Iron and Wine’s 12-inch Vol 3 and Live at the Matrix by the Doors .   I did, however, buy two picture discs, Saxon’s  Into the Labyrinth and Venom’s At War with Satan. I purchased the Venom disc at Independent Records’ Colorado Ave location, which will permanently shut its doors tomorrow (it will soon become a bike shop).

Make sure to visit your local record store even when it’s NOT Record Store Day. If you can find the Iron and Wine 12-inch, you have a 1/400 chance of winning a golden ticket. Iron and Wine, one of my favs….listen to the track below.

Previous: 2017 Record Store Day Releases – Complete List
Next: Watch LP Perform ‘Lost on You’ on BBC One – The One Show