The Formative Days: A Conversation with Former Poison Guitar Tech Paul Lipke. You can read the entire interview @ this location. 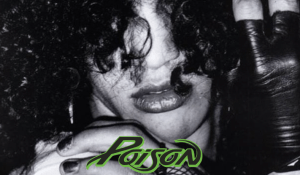 How do you remember Slash’s Poison audition?

The band was getting bigger than ever as far as interest in their live shows. Whenever Mötley was in town, I’d always see Tommy and Nikki at our shows. I still point this out to people to look at their image on the Leather Records release, lots of leather and spikes; Shout at the Devil, more polished; then, bam, total glam for Theatre of Pain. That’s mainly to do with what bands like Poison were doing on the strip!

So, Atlantic approached Vicky [Hamilton] with what back then was something called a “first right of refusal” demo deal, which means (per Hamilton) they had a certain amount of time to decide if they wanted to sign the band after they turned in the demo. If they were gonna get signed, Matt (original Poison guitarist, Matt Smith) was gonna stay with Poison. What happened is, he got his girlfriend pregnant, and he had to make a business decision – “Do I sit out in L.A. and try to become a musician with no guarantee what’s gonna happen to us, or do I go back and become a father?“ 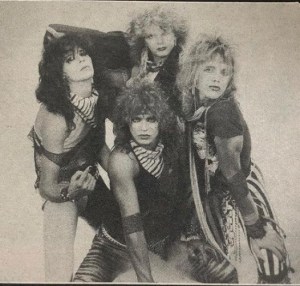 Jim Faraci produced [the demo], but Atlantic wound up passing on them. So, Matt said right away, “I’m done, then. I’m not gonna stay out here. I’m not gonna keep playing these same shows and have record companies pass on us.” So, he went back to Pennsylvania. But in the meantime, before he and I left, we had to find somebody to replace him. I think Vicky set up these rehearsals. I touched base with Matt to make sure, because I have a good recollection of how many guys tried out, and we both came up with the same number. I can’t believe this – people will tell ya that there’s a lot of guys that tried out for his spot – it was only three people; Slash, C.C. DeVille, of course, who got the job, and this guy named Steven Silva, who was in a band called Thundertrain out of Boston. It was three guys over two days, if memory serves me correctly. 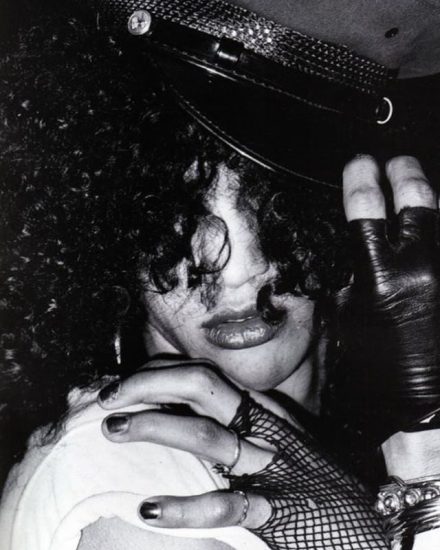 [Slash] came in, I guess we had a door in the front of this place – just picture a storefront with all glass. Actually, Yngwie [Malmsteen] lived there before we did, which is crazy to think about that. He moved out, and we moved in. I think Vicky found the spot for us. But it was in a real shady, seedy area. I just remember Slash coming in, one guitar case – he didn’t have the top hat on – I know he had like a backward baseball hat, that I do remember. He had a three-song demo to learn, and they ran through the three songs maybe twice. It wasn’t that long of a tryout.

In the meantime, those guys are trying to get dates for when the new guitar player does come into the band because we probably had already played Matt’s last show, so Bobby had to go in the other room and he’s calling up all these clubs for the next couple gigs. Somehow, [Slash] knew we were into Aerosmith – could have been while we were setting up for the audition, or I don’t know if we had posters or albums hanging out – but he said, “Let’s do some Aerosmith. What do you guys know?” I know they played three songs, for sure; the first one was “Last Child,” the second one was “Same Song and Dance,” and the third one was “Lord of the Thighs.” 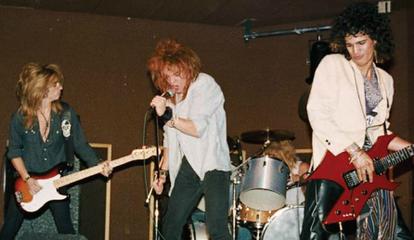 Now, for me, this is like a highlight. If anybody remembers the old Coke commercial where Mean Joe Greene is walking off the field, and he tosses the jersey to the kid, he winks at him and has like a swig of Coke, this is the opposite of that, but it’s in a musical context for me. Rikki’s putting down the beginning drumbeat, and the song starts kicking in, and I’m thinking, “How the hell is he gonna play slide? There’s a lot of slide guitar coming up.” And I know Slash is a slide player from seeing him with Hollywood Rose. So, I’m looking at his guitar case, it’s wide open, and I see a metal slide. So, I look down at him, he looks at me, I look back down at the slide – he like shakes his head up and down– so I bend down, I pick up the slide, and I toss it to him. He catches it puts it on his finger, and he does the slide parts for “Lord of the Thighs.” That’s one of the top five things that’s ever happened to me. Anyway, Matt wound up playing bass on those Aerosmith songs. So, it was Matt on bass, Bret was singing, Rikki was playing drums, and it was Slash. It was killer.

Have you ever run into Slash since then?

Yes, a few times. This one time in particular, at or a little before Appetite came out, I went to L’Amour in Brooklyn with some friends. On the way to the show, we stopped at the record store so I could buy Aerosmith’s Video Scrapbook, as it had come out that day. We get into the club super early, right after Guns sound check. I go to the back bar for a beer, and just as I get there, from behind a column, Slash grabs my shoulder and says, “Hey, dude. What are you doing here?” I replied, “I’m here to see you!” I asked him if I could buy him a drink, and he said, “Yes, a Jack and Coke.” I bought him a double and a Heineken for me, must have cost me $40 after the tip. Anyway, I mention I have the new Aerosmith video on VCR tape. He said, “Go get it and we’ll watch it on the bus.” I meet my friends to get the keys to the car to get the tape, I told them what was going on, and that I would hook up with them later. I bang on the bus door, and he lets me in. We throw in the tape, and a little while in, Steven Adler and his then-girlfriend, Athena (Tommy Lee’s sister), comes on to. I haven’t seen either of them for a few years; Athena had the hots for Matt, and I felt like it was my duty to keep them apart because I liked Matt’s eventual wife, who he later left the band to have his first kid with. Fun times!

Jim Faraci on Ric Browde During ‘Look What the Cat Dragged In,’ “He didn’t do s***”