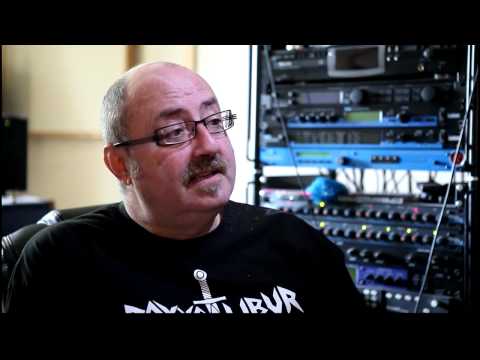 British Grammy-nominated record producer and sound engineer Chris Tsangarides passed away on Sunday, January 7th.  According to his daughter Anastasia Tsangarides, Chris “passed away peacefully after another brave battle with pneumonia as well as heart failure.” He was 61 years old.

Tony Iommi:
“I’m so saddened to hear of the passing of the Producer Chris Tsangarides – he has been a part of my life since the 70 when he worked as tape operator on the Sabbath album Sabotage and he’s worked with me on lots of other albums and stuff. He’ll be sadly missed. RIP my friend.”

Geezer Butler:
“Sad to hear of Chris Tsangarides passing away. He worked on the Sabotage album, a thoroughly lovely bloke. R.I.P. Chris.”

Vinnie Moore:
“I am shocked and saddened that we’ve lost our good friend Chris Tsangarides. it was an honor to have worked with him on the last two UFO albums. he was a sweetheart of a guy with a great sense of humor and a huge heart. i will definitely miss him. a few years back he told us an amazing story about how he had a vivid dream in the hospital when almost losing his battle with legionnaires disease. in the dream, his friends Gary Moore and Phil Lynott told him he needed to go back because it wasn’t his time. sadly for all that knew him, i guess this time it was unfortunately his time. I can only imagine that Gary and Phil were both there again to greet and welcome him. RIP…? nah….not Chris…never. i guarantee he is chatting away endlessly and making everyone laugh with that great sense of humor. God Bless Ya Chris…..I’ll miss ya.”

Scott Gorham:
“Shocking to hear that Chris Tsangarides has passed away. He produced two great albums for Thin Lizzy, was a really good guy to work with and a friend. We will miss him.
RIP Chris. SG”

Overkill:
Overkill are saddened to hear about the death of Chris Tsangarides.
We were fortunate to have worked with him. A great guy with amazing talent, and humor and smile to match. Thoughts go out to his family and friends. RIP Chris

UFO:
“It is with great sadness that we learn today of the sudden and unexpected passing of our friend and producer Chris Tsangarides.
I first met Chris in 1974 whilst making Phenomenon at Morgan studios. Many years later, I had the good fortune to reconnect with him when he recorded and produced our album “Conspiracy of Stars”. Most recently, Chris worked with us on “The Salentino Cuts” bringing his unique style and artistry to the project. Always happy and with an interesting story, Chris had a way of making work just plain fun. I will miss his wry sense of humour and his immense talent. My thoughts and prayers go out to his wife Jane and his entire family.
So long Chris, you will be greatly missed.”

Max Norman:
“Very sad and upset to hear about the passing of Producer Chris Tsangarides. Although we were rivals for many years, Chris was a lovely guy and will be sorely missed. My condolences to his family and friends.”

Steve “Lips” Kudlow:
“It’s with profound sadness I say goodbye to a dear friend… Chris Tsangarides was our beloved record producer who I am grateful to say appeared in Anvil! The Story of Anvil with us. He was truly an amazing human being who had a deep passion for music. He understood not only the music but even more so the musicians. He became part of our lives and he will be sorely missed. Rest easy, my friend.”

Bernie Torme:
“Devastated to hear that Chris Tsangarides, my good friend & all round lovely man (as well as being a legendary producer), passed away today. Chris you will be much missed. RIP Dark Lord. Deepest sympathy to your family, friends & band.”

Rudy Sarzo:
“I am saddened by the news of outstanding producer and dear friend Chris Tsangarides passing. My thoughts and prayers to his wife Jane and family.”

Ginger Wildheart:
“So sad to hear about the passing of Chris Tsangarides. Such a lovely fellow, great storyteller and talented producer. It was an honour to have worked with him.”

Mat Sinner:
“RIP Chris Tsangarides
I had the pleasure to work with Chris an entire summer and the result was the legendary…”

Jay Pepper:
“Absolutely gutted to hear this news. A legend but more importantly a wonderful person and friend. Bless you Sponker x CHRIS TSANGARIDES HAS PASSED AWAY AGED 61.”

Kim Hooker:
“Chris Tsangarides was a legend ..the list of greats he worked with speaks for itself..he was up there with the best of them ..Above all he was the one who guided me through my numerous mental episodes at the Bezerk sessions ..I love you Sponka RIP my dear friend.”