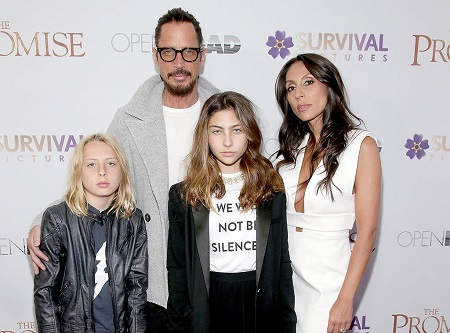 Chris Cornell’s wife has questioned the Wayne County Medical Examiner’s ruling that Cornell committed suicide following a Soundgarden concert in Detroit, MI on Wednesday night. The singer was found dead in his hotel room with a ‘red exercise band’ around his neck – the Wayne County Medical Examiner’s Office later ruled that Cornell had taken his own life by hanging himself.

Now his widow, Vicky Cornell, has released a statement through their family attorney (via Billboard), saying that Chris would not have knowingly and intentionally taken his own life.  The statement points to the medication Ativan as a possible culprit that spurred Cornell’s suicidal actions, stating that Chris had a prescription and may have taken a higher dosage than prescribed.

Following the concert, Vicky said she noticed Chris was slurring his words on the phone, saying “he was different” and that Chris even told her that “he may have taken an extra Ativan or two”, which prompted his wife to contact security. An excerpt from the statement says, “without the results of toxicology tests, we do not know what was going on with Chris — or if any substances contributed to his demise. Chris, a recovering addict, had a prescription for Ativan and may have taken more Ativan than recommended dosages. The family believes that if Chris took his life, he did not know what he was doing, and that drugs or other substances may have affected his actions.”

Ativan is a medication used to treat anxiety disorders, trouble sleeping and has also been used to treat alcohol withdrawal, and chemotherapy induced nausea and vomiting. The medication can cause paranoia or suicidal thoughts and impair memory, judgment, and coordination. When combined with other substances, particularly alcohol, it can slow breathing and possibly lead to death.

The statement continued, “Chris’s death is a loss that escapes words and has created an emptiness in my heart that will never be filled. As everyone who knew him commented, Chris was a devoted father and husband.”

Vicky said that Chris flew home, over the weekend, to spend Mother’s Day with his family and then flew to Detroit on Wednesday afternoon for the concert. “When we spoke before the show, we discussed plans for a vacation over Memorial Day and other things we wanted to do,” she said. ”When we spoke after the show, I noticed he was slurring his words; he was different. When he told me he may have taken an extra Ativan or two, I contacted security and asked that they check on him.”

“What happened is inexplicable and I am hopeful that further medical reports will provide additional details. I know that he loved our children and he would not hurt them by intentionally taking his own life.

“The outpouring of love and support from his fans, friends and family means so much more to us than anyone can know. Thank you for that, and for understanding how difficult this is for us.”

Vicky reveals how she and Chris first met:
“I met you on a starry Paris night at Hotel Plaza Athenee after we were called to arrange Audioslave’s under the radar after show party for the following night. I remember being introduced to you and how your eyes pierced through me. You had the show the next day, and I did not attend. I met up with everyone at your after party, and when you realized I wasn’t at the show, you dryly asked, ‘Well, where were you… out having a sandwich?’ A bunch of us sat, and I recall you ordering foie gras and me asking if you were sure you knew what you were ordering. You always had such elegant taste.”

“A friend asked who was the most beautiful girl at L’Avenue, and you got up in front of everyone, looked all around, came back, and you pointed at me. We talked that night until the sun came up, and it was time for you to leave for the next city. You called me the very next day, and three days later we found ourselves together in London. I remember how you ran in, fearful I had left because you were late from Zane Lowe’s show, and you were meeting me for tea time. At the time, I thought I needed to be careful and tried to distance my heart from falling in love with you… but you didn’t let that happen, and you zigzagged back and forth across the world to visit me. You were permanently jet-lagged because you couldn’t bear our time away from each other.”

“I finally came to visit you in New York on the 2003 Lollapalooza tour and threw your 39th birthday party. A few weeks later, I was on Mykonos, and you were still on Lollapalooza singing to me over the phone, ‘Oh sweet Ms Vicky, won’t you come and marry me.’ I didn’t know what to think other than I loved you, and I was all in. I flew to LA with my mom the day before my birthday in August. You gave me the most beautiful surprises from flowers, candles, and balloons everywhere to wrapped boxes of all shapes and sizes like it was Christmas. You made me feel like a princess.”

“You moved into the Beverly Hills Hotel because I was staying there. You woke up one morning doing flips on the bed. You asked me to come sit with you, and you said you had to take your necklace back. I thought, ‘No… why?’ but you proceeded to cut it off and take the silver ring that was on it and said, ‘I woke up and I had the strangest vision of doing this. I’m not prepared with the real ring, but I want to marry you.’ The ring fit perfectly, and while you surprised me with a Harry Winston several weeks later, I could not bear to take it off, and I used it as my wedding band. The two always represented how different you and I were but how perfectly we fit together.”

“I remember doing the civil wedding and how you cried. I had never met such a sensitive and special man. We had our beautiful babies, and you were convinced we were soulmates, and that you had been looking for me. I’m so happy you found me. I’m so happy for the nearly 14 and a half years we spent together. We did everything together, literally, everything. You were my best friend, and when I wasn’t out on tour, we were on the phone at least four hours a day. You were the best father, husband, and son-in-law to my parents. Your patience, empathy, and love always shone through.”