Kirk Hammett: “We’re honored to take part in the Grand Opening of the Chase Center in San Francisco as we celebrate the 20th Anniversary of S&M! Join us at what is sure to become a cultural landmark in the Bay Area for S&M² alongside the San Francisco Symphony with Music Director Michael Tilson Thomas. 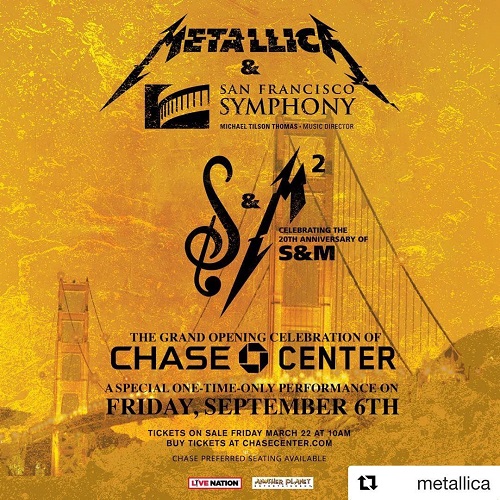 Check this out, you know how much we love firsts and we are always extremely proud to wave the flag for our hometown of San Francisco, so this first is particularly exciting as we announce that we will be performing at the grand opening celebration of the Chase Center with S&M² on Friday, September 6th. That’s right, not only will this be the inaugural event at the new arena in the city, but we will be playing once again with the San Francisco Symphony Orchestra as we join together to commemorate this historic addition to the Bay Area and mark the 20th anniversary of the S&M concerts and album release.

We’re honored that legendary conductor Michael Tilson Thomas will kick off his final season as San Francisco Symphony Musical Director with a special appearance conducting a portion of the show. James and Lars joined Michael, along with representatives from the Golden State Warriors and San Francisco mayor London Breed, to make the announcement at the Chase Center today.

Please join us for this one-night-only show as we celebrate the addition of what is sure to become a cultural landmark in the Bay Area. We’re thrilled to be invited to be a part of it and humbled to be sharing the stage with the legendary MTT and the city’s finest musicians in the San Francisco Symphony.

At this time next week, doors open for @Metallica & @SFSymphony.

Let that sink in ? pic.twitter.com/bq8ublKwiM