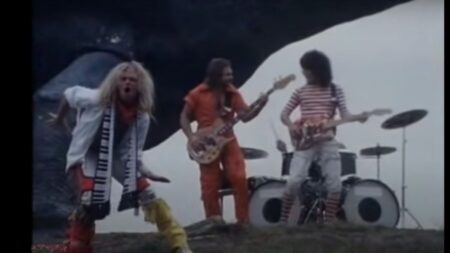 A long-lost relic from Van Halen’s past has been unearthed after more than forty years. The music video features the classic lineup of the band performing the song “So This Is Love.” It was filmed at Prehistoric Park near Milan, Italy, and originally aired on Italian state television during a tv show called Happy Circus. At the time, the band was on their 1981 European tour promoting their fourth album, Fair Warning. Up to this point, there has been very little information available. Hardcore Van Halen fans have often speculated about the so-called ‘dinosaur video’ when photos, taken by the band’s roadies, surfaced in 1995 after being published in a magazine called The Inside.