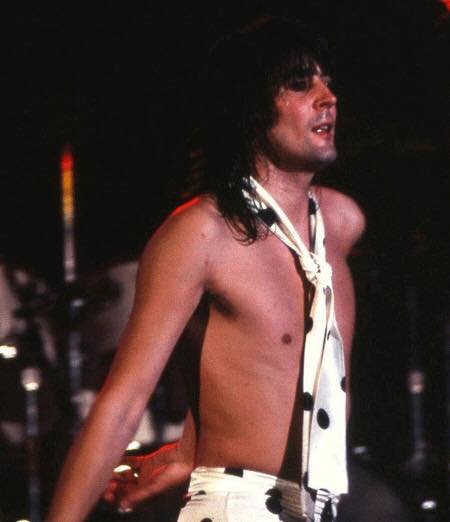 He sustained life threatening injuries in an accident two months ago but fought hard until finally succumbing to those injuries at 11:35am BST today. His wife, Jenny, was at his side.

Pete Way was a much loved and highly regarded figure among rock fans, critics and fellow musicians alike. Best known for his work with UFO, Pete’s energetic live performances were at the heart of the band’s countless world tours. His melodic bass lines underpinned the catalogue of enduring rock classics upon which UFO’s reputation and legacy were founded. Pete’s post UFO work included collaborating with “Fast” Eddie Clarke from Motörhead – the two putting together Fastway with Humble Pie drummer Jerry Shirley and bassist for his long time friend, Ozzy Osbourne. He then put together his own band Waysted. Pete’s keen ear for song arrangements have also seen him serve as producer for popular hard rock acts such as Twisted Sister and the Cockney Rejects. Pete had recently finished a solo album, “Walking On The Edge” with producer Mike Clink (Guns n Roses “Appetite For Destruction” amongst many more.) He had a biography published “A Fast Ride Out Of Here” in 2017 and an album “Amphetamine” which is currently out on Cargo Records.

Pete is survived by two daughters, Zowie and Charlotte and his younger brother, Neill.

“Oh my Dear Pete
I am so sad
Your sweet existence has left us. I am in tears.
You were more than you maybe knew.
You were loved by everyone I know.
I love you Pete.
God Bless You Forever.
My condolences to your loved ones.
From the depth of my heart.

“Fly away and enjoy Heaven” pic.twitter.com/HYpeOUe4oB

He was an inspirational musician and a truly lovely man. Our heartfelt condolences to his family at this time. #PeteWay #UFO

The world lost one of Rocks most iconic bass players today and I lost a dear friend. Love ya Pete! #PeteWay pic.twitter.com/8lTDtGv3Gm

Totally crushed to hear that one of my all-time favorite bassists, Pete Way, passed away. None more cool on the bass than Pete. pic.twitter.com/LJzU0xAxMv

This year keeps getting worse. Pete Way, one of the “characters” of metal and fellow @AVFCOfficial supporter has passed. He supported Deadland Ritual on the show in London. Very funny man. RIP Pete. pic.twitter.com/HtX2Iu152T

R.I.P. Pete Way. A hard rock legend and lovely silly man who I shared many a drink and daft time with, along with Malcolm Dome and Dave Ling. Safe travels fella… pic.twitter.com/FUBqmzasf1

@FTMSeattle, my UFO tribute band, has played over 17 years raising money and awareness for Camp Oasis for kids with #CrohnsAndColitis. Stone and I have had many conversations over the years of our love for UFO. Pete was essential and will be missed. RIP 2/2

RIP Pete Way. one of my favorite & coolest looking bass players ever. If I played bass I would play a Thunderbird on my knees also. thanks for all those great UFO records. Pete Way may u find peace with your Lights… https://t.co/zXYsjkQQrk

Steve Harris is a big Pete Way and UFO fan , love this picture here of the two of them pic.twitter.com/9q9lTtkaIf

So sad to hear of the passing of the legendary Pete Way. He was the prototype badass early metal bassist who surely inspired the likes of guys like Steve Harris and Nikki Sixx. UFO’s Strangers In The Night remains one of my favorite live albums of all time. #RIPPeteWay pic.twitter.com/QmXC9GibP7

HAIL PETE WAY! Obviously UFO are GODS & you know their jams…but this little album is an underrated masterpiece. Hunt it down and freak out! Thank You for the music Pete! The PLOT! https://t.co/gWP5kz9E8o

Very sad to hear of the passing of Pete Way today. The “Strangers In The Night” live album is hands-down one of my all-time favorites, and for me the highlight of the UFO lineup of that day. Pete and his girlfriend actually came to see Megadeth on the Clash of the Titans tour at the Birmingham NEC Arena in 1990 where Dave Mustaine and I had a brief conversation with him just before we took the stage that evening. It’s always impactful to know your heroes are in the audience for your show, the same way I was for his show with Waysted opening for Iron Maiden several years before at Irvine Meadows, CA. Pete’s look, his style, and his simple but powerful bass lines were a highly influential force to my own playing. He will be dearly missed….RIP! #ufo #peteway #waysted

– from your friends Cheap Trick pic.twitter.com/D34JJ6qD9S

– from your friends Cheap Trick pic.twitter.com/D34JJ6qD9S

Sad day. RIP to one my hero’s. Pete Way was a HUGE influence on me and so many others. He knew when to rock steady and when to get melodic and he did both perfectly. All the while throwing the shapes like no other. Check out a recent interview with him in the latest @rockcandymag Thank you Pete! @petewayofficial #peteway #bass #legend #thisisaninfluencer #ufo #fastway #waysted #thunderbird

Sad to read about the passing of Pete Way. I have so many fond and hilarious memories of touring with Pete and UFO back in the 80’s. A true rock & roll character, always "takin' the piss" as they would say in his homeland. – Geddy Lee @PeteWayOfficial #PeteWayRIP